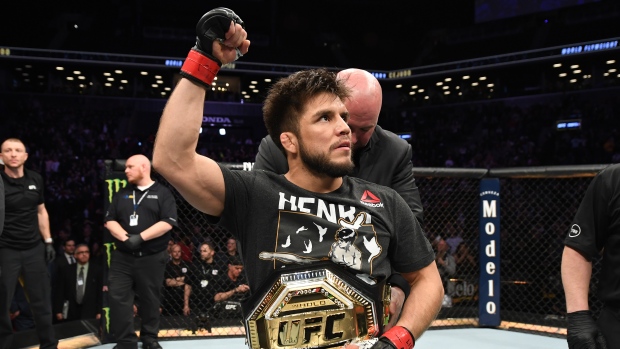 Henry Cejudo will relinquish the UFC flyweight championship to set up a title bout between Joseph Benavidez and Deiveson Figueiredo at UFC Norfolk on February 29, according to multiple reports.

Henry Cejudo is no longer the UFC 125 champ. After it became clear he could not defend the title soon, UFC will move on from and has booked Benavidez vs. Figueiredo for the vacant title on Feb. 29. Cejudo is relinquishing the title, per sources. @MikeBohnMMA first reported.

Cejudo, who is currently a two-division champion, confirmed that he will be vacating the lighter of his titles in a statement to ESPN.

Cejudo captured the flyweight title with a split decision victory over Demetrious Johnson at UFC 227 in August of 2018.

He defended the title once, a first-round TKO victory over then bantamweight champion T.J. Dillashaw at Fight Night: Cejudo vs. Dillashaw on January 19.

After Dillashaw was stripped of his belt for failing a drug test, Cejudo defeated Marlon Moraes via third round TKO at UFC 238 on June 8 to claim the vacant bantamweight title and become a simultaneous champion in two divisions.

Benavidez is on a three-fight winning streak, with victories over Alex Perez, Dustin Ortiz and most recently Jussier Formiga at Fight Night: Ngannou vs. dos Santos on June 29.

Deiveson Figueiredo has captured his last two bouts, a unanimous decision over Alexandre Pantoja and a submission victory over Tim Elliott.  The 31-year-old has suffered only one defeat in his 19-fight professional MMA career.

Jose Aldo, despite losing his bantamweight debut at UFC 245 against Marlon Moraes, has been rumoured to be next in line for a shot at Cejudo’s 135 pound title.