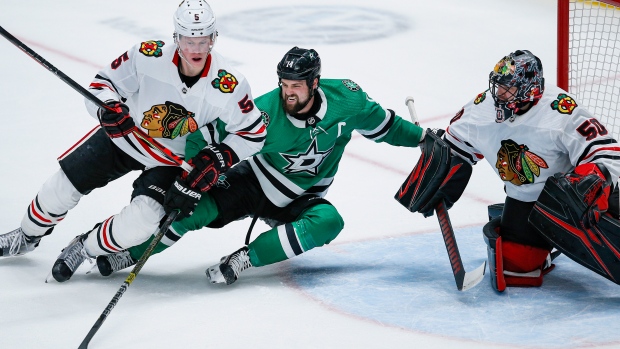 DALLAS — Tyler Seguin scored the tiebreaking goal in the second period and the Dallas Stars beat the Chicago Blackhawks 2-1 on Sunday.

The Stars’ Joe Pavelski opened the scoring in the first period.

Blackhawks rookie Dominik Kubalik tied the game in the second period on the power play.

Dallas goalie Anton Khudobin also stopped 31 shots. As the backup to Ben Bishop, Khudobin has a 15-7-2 record, including 4-0-1 in his last five games.

"He was outstanding,” Dallas coach Rick Bowness said. “There's a lot of teams in this league that would love to have the duo that we have.”

Khudobin’s saves included a shot by the Blackhawks’ Jonathan Toews from the right faceoff circle with an extra Chicago skater on the ice in the final minute.

“We played to the end and we had our chances,” Blackhawks coach Jeremy Colliton said. “They have tremendous defensive awareness and that’s why they’re a good team.”

The Stars remained third in the Central Division. They were coming off a 5-1 loss to division leader St. Louis on Friday.

"That's much more like Dallas Stars hockey today,” Bowness said, “not giving them the odd-man rushes and limiting their chances."

At 15:14 of the first period, Crawford smothered a point-blank attempt by Pavelski, who was spinning around from the left goalpost. Six seconds later, after the Stars won a faceoff, Pavelski took a pass in front from Alexander Radulov, put the puck on his forehand and sent it into the right corner of the net.

Kubalik scored at the end of a 4-on-3 power play, taking a pass from Patrick Kane and firing a slap shot from the right faceoff dot past Khudobin at 7:06 of the second period. An interference penalty against the Stars’ Radek Faksa ended just as Kubalik took his shot.

Chicago (2-6-2 in its last 10 games) was 1 for 5 with a man advantage. The Blackhawks had a power-play goal in each of their last two games after going 0 for 17 in their previous six.

“Our power play generated some scoring opportunities,” Colliton said. “We get a goal, and we get another that they called a penalty on.”

The 1-1 tie lasted until 16:29 of the second, when Seguin took a pass across the slot from Corey Perry. Seguin waited as Crawford slid across the goal mouth to confront him, and the Dallas centre then put a wrist shot past him to a vacant spot in the right of the net.

Just 31 seconds later, the Stars’ Mattias Janmark earned a penalty shot when Chicago’s Duncan Keith hooked him on a breakaway. The shot went off Crawford’s blocker and over the net.

“I have one route that I usually take whenever we do it in practice, kind of go high blocker,” Janmark said. “He came out towards me, so I've just got to get it up a little further."

Chicago defencemen helped stop two odd-man rushes in the third period. Slater Koekkoek hustled back to break up a 3-on-1 advantage with his stick, and Duncan Keith kept Denis Gurianov from scoring on a breakaway with 3:45 to play.

NOTES: Kubalik leads all rookies with 26 goals this season. ... Kane’s assist on Kubalik’s goal gave him 61 points (29 goals, 32 assists) in 51 games against Dallas. ... Chicago D Lucas Carlsson made his NHL debut. He blocked a shot and had three hits. “When you’re playing up here, you have to do everything quicker,” he said. “You just have to keep it simple.” ... Stars D Esa Lindell played in his 300th game.

Blackhawks: Play the second in a four-game trip on Tuesday at St. Louis.

Stars: Begin a three-game trip at Carolina on Tuesday.