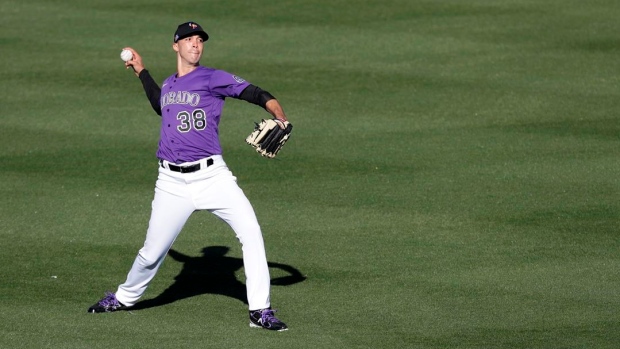 SCOTTSDALE, Ariz. — It was only a short outing in a Cactus League game, but it meant a lot to Ubaldo Jimenez.

The 36-year-old took another step in his comeback attempt with the Colorado Rockies on Wednesday, pitching two innings against the Texas Rangers.

Jimenez threw 21 pitches, 14 for strikes. He gave up two hits and one run, with no walks or strikeouts.

"It might be only a start for anyone else, but not for me," Jimenez said. "It felt great, especially coming back to the Rockies. It was fun.

"I had to keep telling myself, 'Hey, just relax, don't try to do too much.' It was the first time that I've been out there in a while. I was able to step back and do my thing."

After taking 2018 off, he started throwing again last summer. He pitched in the Dominican Winter League, going 1-4 with a 3.03 ERA in eight starts. He signed a minor-league deal with the Rockies, his original team.

He gave himself a passing grade Wednesday.

“The fastball command was great,” he said. "I was able to throw a lot of strikes down in the zone. That was the focus. Just to be aggressive in the strike zone and make them swing the bat. I got five ground balls, so it was a good day."

Manager Bud Black said it was a good first step.

Unlike most pitchers, Jimenez has had success pitching at elevation. He had a 3.66 ERA over six seasons in his first stint with the Rockies. His career ERA is 4.34.

While he's not likely to turn back the clock a decade, Colorado can always use pitching and with an effective spring Jimenez could find himself in the back end of the Rockies' rotation.

"Well, just keep doing what I did today," he said when asked what he needs to do. "Make the hitters see that I'm not going to be scared of throwing strikes."