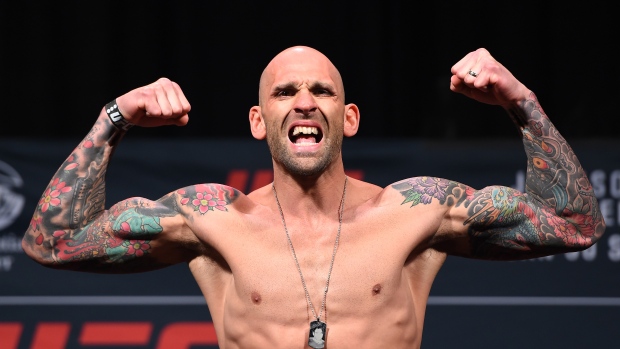 The mixed martial arts organization said New Jersey welterweight George (The Silencer) Sullivan has been advised of a potential violation by the U.S. Anti-Doping Agency stemming from an out-of-competition sample Jan. 14.

Sullivan (17-5-0 with one no contest) is currently serving a one-year ban for using the prohibited substance Insulin Growth Factor -1 (IGF-1).

The 35-year-old fighter was due to end his current suspension on Jan. 31, and was slated to fight Randy Brown on Feb. 11 at UFC 208. As a result of the latest doping charge, Sullivan has been provisionally suspended and removed from the New York card.

The UFC says it is looking for a new opponent to face Brown.

Sullivan's initial drug ban did not result from a positive test. Rather it came after he declared the use of a prohibited substance contained in a supplement — a deer antler velvet product — that was inaccurately labelled.

USADA said while no prohibited substances were listed on the supplement label, the manufacturer said on its website that each bottle contained an extremely high concentration of IGF-1.

In deciding Sullivan's level of fault, USADA banned him for one year rather than the maximum two years.