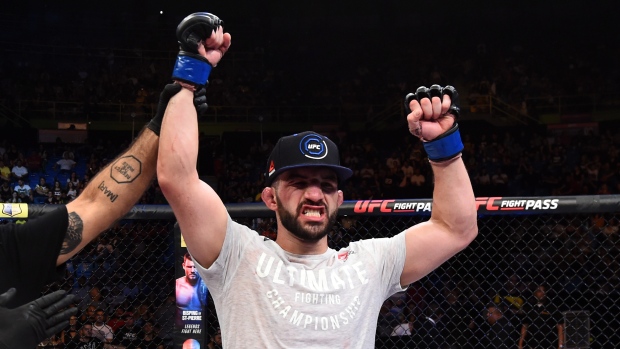 UFC fighter Jared Gordon is currently training to face Matt Sayles in San Diego on May 16 in what will be his return to the featherweight division.

One thing he did not expect to run into during his training was the law, but that’s what happened just before a session at his Fort Lauderdale gym. A new reality of trying to get ready for a fight during the COVID-19 pandemic.

“I came into the gym and went into the locker room to get changed, when I got out to get on the mat, the police arrived and told us we couldn’t be in there,” Gordon told TSN’s Aaron Bronsteter. “They said if we don’t leave, they were nice about it, they said ‘you’re subject to arrest’ so you have to leave. The location is shared by an NFL combine training gym and there were some NFL guys in there and the NFL guy was like ‘look, we don’t leave until the NFL tells us to leave’ and the cops were like, no you have to leave now.”

After five fights in the lightweight division, Gordon is moving down a weight class. A move he believes will lead to a major positive step in his fighting career.

“I’m excited to go down to 145lbs, it’s like a new chapter for me,” said Gordon. “I’ve fought there before, but I truly believe I’ve been fighting out of my weight class at 155lbs. The guys are always taller, bigger, longer than me when I’m fighting at 55. I’m not really worried about that, I just have to be disciplined, eat correctly and I have a good amount of time before the fight, so I’ll be able to get my weight down.”

The new realities dealing with the coronavirus however, are making things much tougher for the 31-year-old.

“With this whole thing going down, everything is up in the air,” said Gordon. “Dana (White) is pushing for the fights to go on and obviously as fighters if we don’t fight, we don’t get paid so obviously I want to fight in May, I haven’t fought since November, coming off an injury. We’re getting kicked out of the gym, our training is compromised, everything is compromised.”

With the possibility of things being in flux, Gordon is just doing the best he can with the resources and information available.

“We’re unsure,” said Gordon. “The next three UFC fights have been postponed, they say everything is going to get worse before it gets better so I can only imagine that my fight might get postponed.”

“Obviously, that’s not what I want, I’m doing everything I can to stay fit and stay in shape and get my weight down and get the training that I need to get in. I’m definitely concerned, but I’m giving it to God and going with the flow and doing what I can right now.”