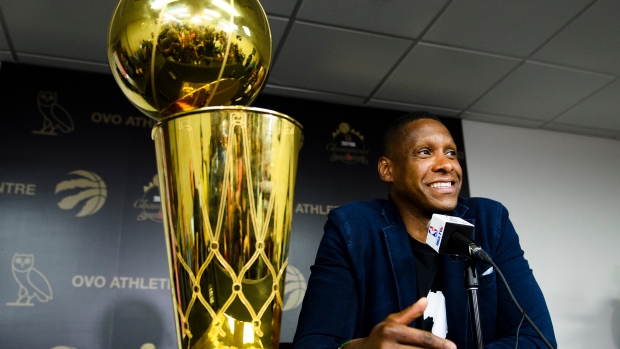 TORONTO – Most people were skeptical the first time he said it. Why wouldn’t you be?

“Guys, the overall goal in the NBA is to win a championship,” Masai Ujiri, the Toronto Raptors’ newly hired general manager, exclaimed at his introductory press conference on the concourse of what was then the Air Canada Centre back in the summer of 2013.

“That has to be the overall goal. It’s not playoffs. It’s to win a championship in the end… I want to put a product out there that’s going to compete one day for a championship.”

Few can command a room and deliver a rallying cry quite like Ujiri, as we would come to learn over the years. He went off script and spoke with passion and conviction. It sounded great, in theory.

You wanted desperately to believe it could happen, but that’s where your heart and head likely diverged.

The Raptors were stuck in a five-year postseason drought, longest in franchise history. They had won a single playoff series in their 18-year existence and were hamstrung by underperforming players on bad contracts. There was no reason to think they were anywhere close to fielding a competitive roster, let alone contending for a title any time soon.

Yet, that never stopped Ujiri from dreaming big.

On Thursday, eight years after he initially took the job atop Toronto’s front office, Ujiri sent a similar message. This time, it hit differently.

With his previous contract set to expire this summer, Ujiri finally put an end to months of speculation. The 51-year-old executive and architect of the Raptors’ 2019 NBA championship will remain with the club after agreeing to a multi-year extension.

His new contract – which is expected to make him the highest paid executive in league history, worth north of $10 million annually, according to league sources – also comes with a new title, vice-chairman and team president.

“Home is where I gather my strength and get my inspiration, and Toronto, you inspire me,” Ujiri said in a video released by the team on Thursday afternoon. “I love being the leader of the Toronto Raptors, and I’m here to stay.”

The news itself shouldn’t come as a surprise, even if it took longer than expected to make things official. Ujiri took his usual hands-on approach throughout the pre-draft process and had final say on the decision to select Scottie Barnes with the fourth-overall pick. He’s been working the phones and leading pitch meetings since free agency opened earlier this week. That never sounded like somebody that was conducting business with one foot out the door. Most league insiders, and even people within the organization, felt like it was just a matter of when, and not if, a new deal would get done.

It’s unclear what took so long. It’s not like Ujiri needed any more leverage, given his profile, his standing within Maple Leaf Sports & Entertainment, and ownership’s considerable resources. One of his stated goals was to take care of his front office staff before negotiating his own deal, a box that got checked off with the extension for general manager Bobby Webster in February.

Whether it was a coincidence or not, this is interesting timing. Toronto has had a slow and somewhat uninspiring start to free agency. The team and its fans said goodbye to Kyle Lowry, a franchise icon, whose sign-and-trade deal to Miami will be completed on Friday afternoon. They retained a couple of their own players, Gary Trent Jr. and Khem Birch. But any new additions they make to a team that went a disappointing 27-45 last season could be limited to their return for Lowry – likely intriguing second-year big man Precious Achiuwa and veteran point guard Goran Dragic – plus a few depth signings.

The Raptors have lost key members of their championship core in each of the last three summers, so they’ve been trending in a different – and much younger – direction for a while. However, Lowry’s departure feels like a symbolic turning of the page. This is a new era, and if it’s going to be as successful as the last, or anywhere close, there is significant work that needs to be done. That Ujiri remains at the controls should inspire confidence, though.

“On the court, our goal is clear: to bring another championship to Toronto,” Ujiri said in a press release. “Our team is united in that mission. Nothing else will do. We will bring young talent to this city. We will value the veteran players who got us here. I’ve said it before and I’m saying it again: We will win in Toronto.”

It’s a familiar message, and one that’s hard not to take seriously. There’s a credibility to it that wasn’t there eight years ago.

He’s done it before. Ujiri took an organization that had been an NBA afterthought for almost two decades, a team that was weighed down by the bloated contracts of Andrea Bargnani and Rudy Gay, and he turned it into a perennial winner, respected franchise and, eventually, a champion.

He challenged Lowry to be more than what he was, he found talented young players late in, or even outside of, the draft, and he knew when to push his chips in, trading for Kawhi Leonard and Marc Gasol. All the while, he empowered the city of Toronto and country of Canada, while inspiring countless young men and women around the globe with his philanthropic efforts in Africa and continued advocacy for equality and social justice – work that’s near and dear to his hearts and something that he’ll be able to do even more of in his new role.

This Raptors team, as currently constructed, isn’t close to contending for another championship. But, as Ujiri has proven, in this league, you’re never that far away either. Expect this front office to try and replicate a formula that’s already worked for them once before: grow and retain a group of young players, build around them while collecting assets and maintaining flexibility, and then be ready to strike when an opportunity presents itself.

With respect to Lowry, the greatest Raptors player ever, or his successors – the young core of Fred VanVleet, Pascal Siakam and OG Anunoby – the face of this team and its most irreplaceable member comes to work in a suit, not a jersey. It is and has been Ujiri. Losing Lowry hurt, to be sure, but allowing Ujiri to get away would have been far worse, not just because of his leadership, shrewd negotiating and seemingly endless rolodex, but because of what he represents.

In addition to the many qualities that make him one of the most well-regarded executives in all of professional sports, the most important thing he brings is hope.​