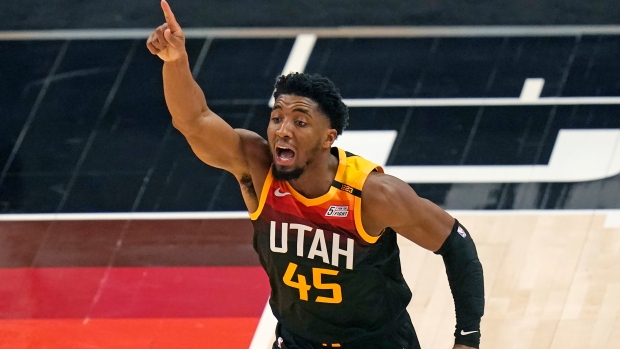 SALT LAKE CITY — Utah turned to its defence when its outside shots weren’t falling.

The Jazz held Miami scoreless over six-minute stretches of both the second and third quarters, turning a close game into another blowout.

“We know the shots are not always going to fall,” said centre Rudy Gobert, who 16 points, 12 rebounds and three blocks. “It’s basketball. But we know we get a chance to win every single night with our defence.”

Bojan Bogdanovic added 19 points and Georges Niang had 14 for Utah, which has won 18 of its last 19 games since a 4-4 start.

The Heat had a four-game winning streak snapped.

“We just did not do things with a great motor and purpose,” Miami coach Erik Spoelstra said. “If you get caught late in the clock, they can really swallow you up with their discipline and their size, with Gobert in the paint.”

Mitchell made three straight baskets in just 58 seconds, including back-to-back reverse layups, to spark a 16-0 Jazz run to open the second half. Royce O’Neale capped the run with a steal and slam, giving Utah a 63-42 lead.

Miami did not score its first points of the second half until Tyler Herro hit a jumper with 5:51 left in the third quarter. The drought lasted 14 straight possessions for the Heat.

“We let our offence dictate our defence,” Butler said. “We started missing shots, not getting back, not rebounding. And then they started scoring, so it’s always going to look like that whenever you’re not guarding. You got to anchor down and guard somebody.”

Utah struggled to build any consistent rhythm on offence during the opening quarter against a tenacious Heat defence, going 1 for 12 from 3-point range. So the Jazz attacked the rim to get the offence going.

The shots started falling in the second quarter. Utah scored baskets on six straight possessions early in the period and tied it at 31 on a layup from Bogdanovic. Jordan Clarkson scored a basket and assisted on four others during that stretch.

Herro and Max Strus scored back-to-back baskets to make it 36-31 the Heat then missed eight straight shots and went six minutes without scoring.

Utah answered with a 14-0 run in that stretch to take a 45-36 lead. The Jazz finally went ahead for the first time on back-to-back baskets from O’Neale and Clarkson.

Heat: Goran Dragic (left ankle sprain) and Avery Bradley (right calf strain) did not travel with the team to Utah. … Strus is averaging 18.0 points over his last two games. He scored 15 against the Jazz. … Kelly Olynyk finished with 10 rebounds.

Jazz: Mike Conley missed his fourth straight game (right hamstring tightness). … Gobert’s half-court heave at the first-quarter buzzer was his first 3-point field goal attempt since the 2016-17 season. He is 0 for 4 from 3-point range for his career. … Utah outscored Miami 13-2 in second-chance points and 20-10 in fast-break points.

Joe Ingles finished with a team-high six assists, tying him with Pete Maravich for seventh place on the Jazz career list with 1,844. He is averaging 5.9 assists in February while making four starts.

“It’s like passing money around at a casino. Everybody gets a little piece.” – Niang on how dangerous the Jazz offence is because so many players touch the ball on a typical possession.