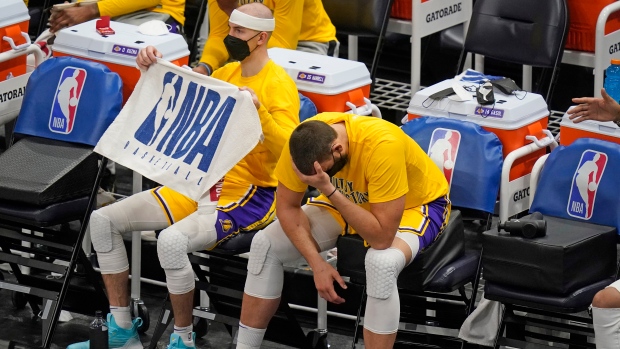 Gobert also had nine rebounds for Utah (26-6), which won for the 22nd time in its last 24 games — with 20 of those victories coming by double-digits. Bojan Bogdanovic added 15 points, Mike Conley had 14 points, eight rebounds and eight assists, and Donovan Mitchell finished with 13 points, 10 rebounds, and eight assists.

LeBron James scored 19 points and Montrzel Harrell added 16 to lead the Lakers (22-11), who lost their fourth straight and fifth in six games.

Back-to-back baskets from James and Marc Gasol gave the Lakers a 17-13 lead as Los Angeles hung with Utah for a quarter. But the final three quarters belonged to the Jazz.

Utah scored baskets on four straight possessions — starting with back-to-back buckets from Clarkson — to take a 35-25 lead early in the second quarter. Clarkson, Royce O’Neale and Conley each hit a 3-pointer in that stretch. That was a sneak preview of Utah's barrage of outside baskets.

The Jazz made eight 3-pointers during the second quarter and shot 14 of 23 (.609) from long distance in the first half. They built a 63-47 halftime lead after Mitchell drained a 3 and Gobert followed with back-to-back baskets over Utah’s final three possessions of the half.

The Jazz slammed the door early in the third quarter when Gobert threw down back-to-back alley-oop dunks to extend Utah’s lead to 71-47.

Lakers: Talen Horton-Tucker made his first start of the season and the second of his NBA career. Horton-Tucker had a team-high five assists. … Los Angeles scored eight points off Utah’s first four turnovers in the first quarter.

Jazz: Mitchell led Utah in rebounds for the first time this season. … The Jazz made at least 20 3-pointers for the 11th time this season, moving them into a third-place tie with the 2019-20 Dallas Mavericks for the most such games in a season. Utah shot 22 of 48 from 3-point range overall.