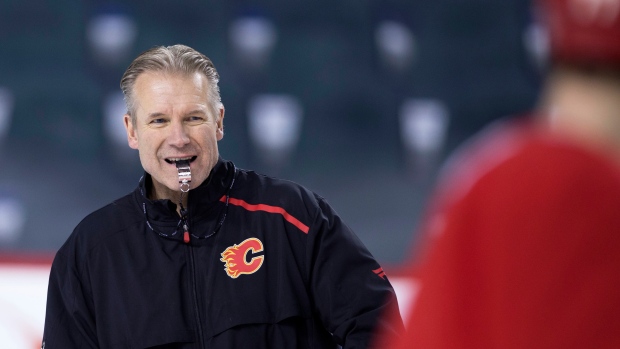 Calgary Flames head coach Geoff Ward says the league is telling its teams that there will be a 2021 season, despite reported disagreements between the National Hockey League and NHLPA about financial concessions during the COVID-19 pandemic.

“We’re moving ahead like there’s going to be [a season],” he said in an interview with TSN this week. “The league is definitely saying that there will be a season. So as a coach and as coaches of our team, our staff is doing an awful lot of work to make sure we’re prepared. Right now, we’re preparing as though it’s going to be January 1 until we hear otherwise.”

Given uncertainty about travel between Canada and the United States, Ward has also started thinking about the possibility of an all-Canadian division.

“Again, you know I think a lot of the work that we've done in the off-season, they can do whatever they want in terms of what the league is going to look like,” he said. “I think that with the way the quarantine is looking right now, a Canadian division seems like it's becoming more and more of a reality and that's going to be awesome.”

Ward, who is in Calgary, was speaking on his one-year anniversary of being named Flames interim head coach following the resignation of Bill Peters.

“Until you guys reminded me a couple of days ago, I really didn’t realize it had been a year,” he said. “It’s kind of gone by relatively quickly.”

A fixture behind NHL benches as an assistant since getting hired by the Boston Bruins in 2007, Ward guided the Flames to a 25-15-3 regular-season record and a Return To Play qualifying-round series victory over the Winnipeg Jets before being eliminated in the first round by the Dallas Stars.

In September, the Flames rewarded him by naming him the club’s 20th head coach.

“For me, it really was just business as usual,” he said, of assuming the role despite the circumstances. “My whole focus last year after taking over was to make sure that we did as much as we could to prepare our team. I was really focused on our team more than anything else.”

Ward praised last season’s roster for being a tight-knit group.

“We’ve got excellent team chemistry,” he said. “That was one of the things I thought was a strength of our team last year.”

With Ward at the helm, the Flames were third in the NHL in power play percentage, ninth in five-on-five save percentage, and 10th in goals for per game.

Flames general manager Brad Treliving commended Ward for getting the best out of the team given the situation he was taking over in Calgary.

“His ability to pivot is a great quality in today’s times,” Treliving said in an interview this week.

“Under trying circumstances, I thought Geoff and his staff did a really good job.”

When the puck drops again, Ward will have a group that now includes one of the league’s best goalies in Jacob Markstrom, the ex-Vancouver Canuck who the Flames hope will be the answer to the franchise’s perpetual questions in goal.

“You can’t have a lot of success in this league without having good goaltending,” Ward said. “We feel like we have acquired a real, real good goaltender in the league…it allows us to play with confidence.”

With his interim tag lifted, Ward doesn’t think his players will need a long adjustment period once training camps get underway.

“The fact that we were able to establish a style of play and have some confidence in it and the guys know what to expect in terms of what we’re doing on the ice, that lends to having a little less communication because we know exactly where our takeoff point is going to be when we all get back together here in Calgary,” he said.

The COVID-19 situation has deteriorated rapidly in Alberta the past two weeks. This week, Hockey Canada suspended its World Junior selection camp in Red Deer and quarantined players and staff for two weeks after two players tested positive for COVID-19.

Despite that, Ward anticipates the new season is just around the corner.

“We’re acting as if training camp is going to be December 15 and that the season is going to start January 1,” he said.

“For us, we’re getting everything in place that we need to have in place for those dates. And if it happens to be a bit of a longer wait, then we know that we’ve got all the work done and we can adjust easier that way.”