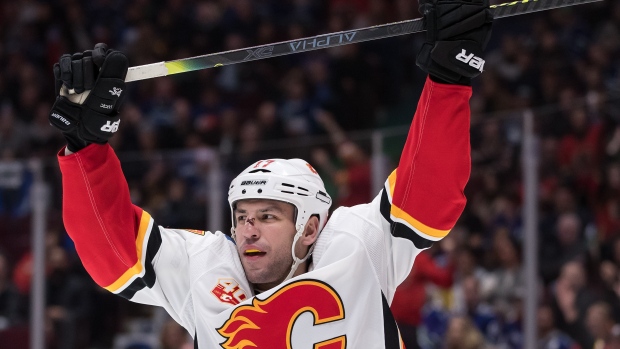 Road trips to Drumheller and Canmore in southern Alberta. Canoeing in the Rocky Mountains. Skating outdoors with his young family.

Even a little dogsledding.

These are just a few of the things that Calgary Flames forward Milan Lucic has been up to during the past few months.

“It’s probably been one of the longest off-seasons I’ve ever had, but I’m doing what I can to stay busy, mentally ready and mentally sharp, physically as well,” the veteran forward said in an interview with TSN this week.

“That’s basically what I’ve been doing this whole off-season.”

As for the dogsledding adventure, Lucic found time to do it twice.

“Last time, I had an instructor with me, a driver,” he said.

Beyond exploring southern Alberta, Lucic has been skating several times a week with a few of his Flames teammates, including captain Mark Giordano, young blueliner Rasmus Andersson, and 22-year-old forward Dillon Dube, in small groups at the Saddledome.

“Before the new restrictions came in [on Dec. 13], we had a little bit of a bigger group, but now with new restrictions, we’ve been restricted to smaller groups this week,” he said.

“That’s been one luxury here in Calgary that we’ve been able to have, is having a good workout group and having a good skating group.”

Lucic has already gotten to meet prized free-agent acquisitions Jacob Markstrom, who arrived in Calgary on Dec. 7, and Chris Tanev, who has been in the city for a few weeks.

“[Tanev] is living close to me here in Calgary, so I’ve spent a lot of time with Chris over the last couple of weeks.”

“I think he’s an underrated puck mover and an underrated skater from skating with him for the last three or four weeks,” Lucic said.

“Very excited to have those two guys a part of this team. They were a big part of the Canucks making it to the second round last year and…we’re happy to have them on our side now and hopefully we can make that next step.”

Despite the clock ticking, Lucic seemed hopeful about the prospects of a mid-January start date to the new season.

“I’d love nothing more than for us to start here, mid-January, and get what a lot of people are saying, a 56-game season in, because I’m excited about our team,” he said.

“I’m excited about what we can achieve moving forward. I just want to get back on the ice and playing hockey again.”

While initially it appeared that with current border restrictions, an all-Canadian division was almost guaranteed, TSN's Frank Seravalli reported on Thursday that stalled negotiations with provincial health authorities could lead to all seven Canadian teams having to play in the U.S. Still, there is a chance that the Flames will have a few more clashes with the Edmonton Oilers in the coming months.

The two Alberta teams had a couple of memorable showdowns last season. On Jan. 11, 2019, Matthew Tkachuk and Zack Kassian went after each other all game, with the Oilers winger getting suspended for two games for "serving as the aggressor." Less than a month later, Cam Talbot and Mike Smith fought each other in one of the league's only goalie fights this decade.

When asked to describe how the Battle of Alberta is shaping up for 2020-21, Lucic had one word: