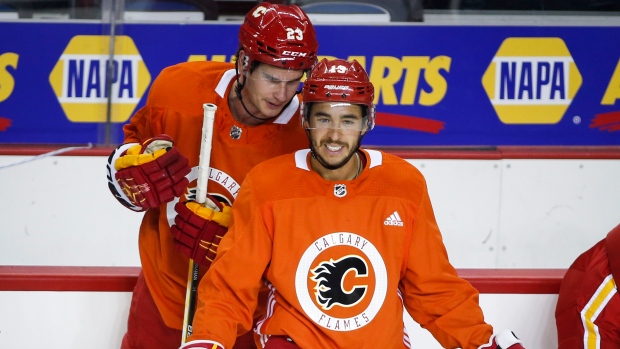 The one topic that every Calgary Flames fan is thinking about as the 2021-22 NHL season approaches is the same topic that likely won’t be addressed much in the coming months.

On the first day of training camp at the Saddledome, star forward Johnny Gaudreau – a pending unrestricted free agent after the season – was asked about his future with the organization that drafted him in the fourth round (104th overall) in the 2011 Draft and with whom he is 10th in career points (494).

“I probably won’t answer many questions throughout the year about that.”

Gaudreau’s agent Lewis Gross didn’t respond to questions from TSN when asked about contract talks with the Flames.

The five-time NHL All-Star opened camp in his familiar spot beside longtime linemate Sean Monahan, with Andrew Mangiapane on the right side. Mangiapane’s popularity grew after Canadians saw him dominate at the 2021 World Hockey Championship, earning a gold medal and tournament MVP honours following a 11-point performance.

“I think this will be a huge year for him. He’s got the confidence, he can carry pucks, he protects pucks. He plays well [at] both ends of the puck and he’s fun to play with.”

Instead of making the major trades that fans were clamouring for in the off-season, Treliving tinkered with the team’s depth while bringing in two-time Stanley Cup champion Blake Coleman and former first-round pick Nikita Zadorov on the back end.

Meanwhile, Coleman started on a line with Elias Lindholm and Matthew Tkachuk.

“He put the puck in there a lot today. Obviously, I’ve watched him a lot the past couple of years as he’s won the past two Stanley Cups, so I’m very impressed with him. He looks good out there. The NHL keeps changing every few years it seems like, styles and stuff, and to have a guy who’s won in the last recent year, knows what it takes, has played in those big games, scored big goals, has played on a great team, knows how a great team should be, is a perfect guy to add to our locker room, I think.”

“Blake is not going to change the way he plays,” Flames head coach Darryl Sutter said. “He’s a 200-foot guy…I think Matthew with those two guys will be a good fit…as this camp goes on, I really want to see if that’s something that works.”

Zadorov, known more for his physicality than puck-moving skills, is the main addition to a young defence corps that includes 24-year-olds Rasmus Andersson and Noah Hanifin.

“One of the biggest problems this team had with expectations last year was that there was a lot put on five either young [defencemen] or guys who hadn’t played in the NHL much,” Sutter said. “It’s not one guy [replacing Giordano]. It’s getting pairs together and seeing who can complement each other. That’s the biggest challenge, to be honest, that I’ll have during camp. It’s not the forwards…on defence, we’ve got to find the right pairs and see how it comes together.”

The entire organization is banking on the new additions (Trevor Lewis, Brad Richardson, Tyler Pitlick, and Erik Gudbranson included), internal growth, the presence of fans in the arena, and closer-to-normal circumstances to propel them to the playoffs in what is shaping up to be a weak Pacific Division. The key to all that will be a full training camp under Sutter, who has firmly turned the page on last year.

“Anything that’s got to do with last season, for me that’s not a season,” he said.

As for the identity he wants the Flames to grab hold of this season, Sutter said an “honest, hardworking team” works for him.