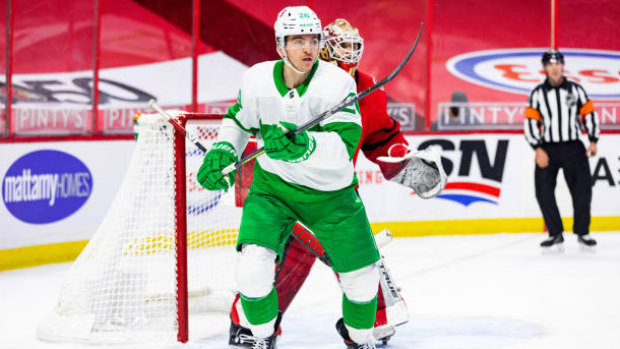 The Vancouver Canucks claimed forward Jimmy Vesey off waivers from the Toronto Maple Leafs on Wednesday, while the Ottawa Senators claimed goaltender Anton Forsberg from the Winnipeg Jets.

Vesey, 27, has five goals and seven points in 30 games this season. He joined the Maple Leafs as a free agent in the off-season on a one-year, $900,000 deal. Maple Leafs general manager Kyle Dubas said Tuesday the move to place him on waivers was made in part due to salary cap reasons.

“I thought that competition [for spots early in the season] really fuelled great performances from those [bottom-six] players," Dubas said. "But really when Campbell came off long-term injured reserve [in late February] and back onto the roster, but has now been sort of day-to-day here [with a lower-body injury], it has sort of limited what we can do, especially because we don't have much waiver flexibility with those guys on the lower end of our roster.

Forsberg was claimed off waivers by the Jets in January from the Carolina Hurricanes. The 28-year-old has not appeared in a game this season.

“On account of recent injuries, Anton’s acquisition provides us with depth and stability at the goaltending position," Senators general manager Pierre Dorion said. "He's a goaltender who’s athletic and positionally sound. His addition should prove beneficial for us.”

The Canadiens said Byron was waived for assignment to the team's taxi squad. He cleared waivers on Feb. 15, when the team used the same reasoning.  In 27 games this season, the 31-year-old has two goals and seven points.

Grigorenko, 26, returned to the NHL this season with the Blue Jackets on a $1.2 million deal after three seasons in the KHL. He has two goals and seven points in 18 games this season.

The Colorado Avalanche put defenceman Daniel Renouf on waivers Wednesday. The 26-year-old has three assists in 10 games this season.