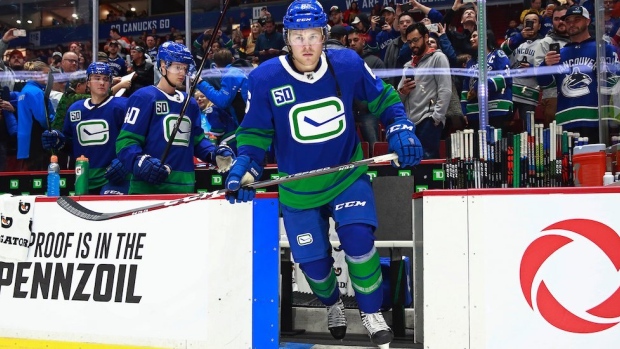 The Vancouver Canucks still own their first-round pick for this year for the time being.

In a Return to Play memo which the NHL sent out to clubs this past week, the league made a decision on conditional trades impacted by playoff participation, sources confirmed to TSN Hockey Insider Pierre LeBrun.

There was confusion on Tuesday when the NHL made the official the 24-team format as to whether that meant all those teams had clinched a playoff spot.

A playoff berth in the 2019-20 season automatically transfers Vancouver’s first-round pick to the New Jersey Devils.

The Canucks originally traded their first-round pick to Tampa Bay last June for J.T. Miller and the Lightning then dealt that pick to New Jersey before the Feb. 24 trade deadline for Blake Coleman. But the condition on the trade was that the Canucks had to make the playoffs this season for the pick to transfer for the 2020 draft. If the Canucks missed the playoffs, the Devils would instead get Vancouver’s 2021 draft pick - unprotected.

“More specifically, for Trade condition purposes, a Club will not be deemed to have qualified for the Playoffs unless or until they have progressed into the Round of 16, and ‘Playoff Games/Rounds’ will only include the games/rounds played in the Round of 16 or later,” the memo read.

“We believe this interpretation will best reflect the intentions of the parties at the time of the Trade.”

So, the Canucks have to win their play-in round against the Minnesota Wild this summer for the first-round pick to officially transfer to New Jersey.

If Vancouver loses that play-in series, the Canucks officially miss the playoffs and keep the pick - which would be a draft lottery pick - and the Devils would instead get Vancouver’s 2021 unprotected first-round selection.