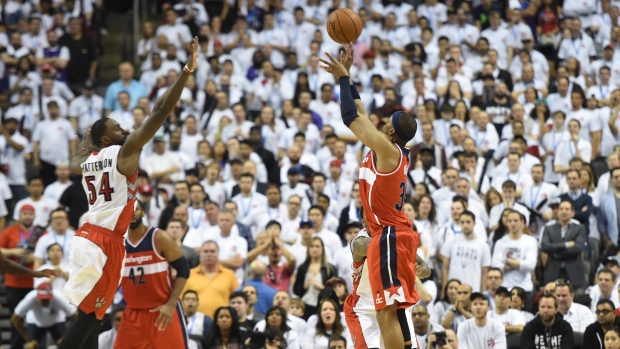 TORONTO - Greivis Vasquez had one last thing to say about Paul Pierce: Stop talking about him.

"Give him a lot of credit. He got you guys' attention, he got everybody's attention, and if we keep talking about Paul Pierce, this is going to be the Paul Pierce series," Vasquez said Sunday.

Just one game into the Raptors' playoff series versus Washington, Pierce has dominated storylines, arriving in Toronto as the ready-made villain. But the 17-year NBA veteran clearly feeds off that role, scoring a game-high 20 points to lift the Wizards to victory on Saturday.

When a reporter asked Vasquez about the "psychological war," the Raptors outspoken guard had plenty to say.

"Man, I'll tell you this, this the last day I'm going to answer anything about Paul Pierce," Vasquez said. "What he's doing is motivating his team, talking trash, so why would we talk trash? I don't know if you're from Toronto but we don't have any trash-talkers in our locker-room.

"He's got big balls, that's the reason he's 'The Truth.' Good for him. He's a Hall of Famer. We love his game. I'm a big fan, I've got a picture of him, too. He's an animal. I think that you guys have got to stop asking all of us questions about Paul Pierce. Let him do the talking, and we'll see at the end who's going to win the series."

Pierce was already Public Enemy No. 1 after last year's series with Brooklyn, when he blocked Kyle Lowry's final shot of Game 7 to send the Nets to the second round. Days before this series started, he was quoted as saying he wasn't worried about Toronto because they didn't have "it."

"Obviously we had to deal with that when he was with Brooklyn, the comments that were said and now that he's with Washington and even more comments were said. It's pretty much like a record on repeat," said Raptors forward Patrick Patterson. "At the end of the day it's competition, it's basketball. You try to win the war any way possible whether it's with words, whether it's with your play, you try to find some type of ammunition to use."

"I guess Paul has done it before, I'm sure it's been done before and he's got a championship so I guess he's been successful at it," Casey said. "I haven't seen very many times where people talk themselves into a game. . . again, if that's the way he feels, fine."

Game 2 is Tuesday in Toronto before the series shifts to Washington for Game 3 on Friday and Game 4 on Sunday.