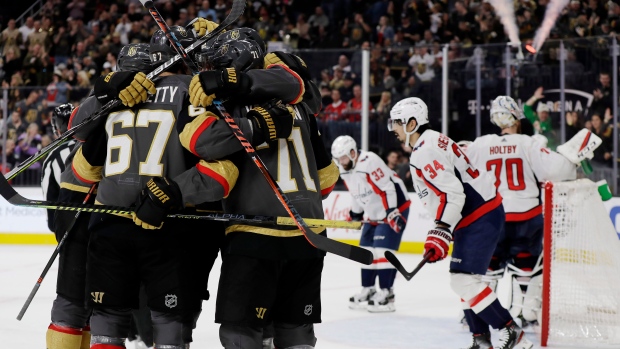 LAS VEGAS — Marc-Andre Fleury looked out at Alex Ovechkin and the Washington Capitals, and the veteran goalie had just one thought regarding Ovie's bid for a historic goal.

“Not today, not today,” Fleury said.

Ovechkin remained stuck on 698 career goals after being held without a point for the fifth consecutive game, his longest drought of the season. Ovechkin has 24 career goals against Fleury, tied for the most he's scored against a single goaltender in his career, along with the New York Rangers' Henrik Lundqvist.

"I'm sure he'll get it soon," said Fleury, who earned his 462nd win to move three victories ahead of Lundqvist for fifth on the career list. "I'm just happy I'm not gonna be the goalie on SportsCenter, 48 times showing that goal."

It was Vegas' third straight victory, including two over the last two Stanley Cup champions. The Golden Knights also improved to 7-3-2 since coach Pete DeBoer took over for Gerard Gallant, who was fired on Jan. 15.

When DeBoer took over, he said there would be non-negotiables he wanted to see from the Golden Knights, including a commitment to playing 200-feet of hockey nightly, making the extra effort to block shots, defending well and keeping pressure on opposing goalies.

Under DeBoer, the Golden Knights came into the game ranked No. 1 in the NHL with 37.2 shots and 26.6 shots allowed per game, fourth with 102 takeaways and seventh with 3.45 goals per game.

"We're real close, there's always an adjustment period," DeBoer said. "I think these guys have really embraced what we're asking them to do and they're getting rewarded for it, which helps speed up the process.

"I like how we're defending. I think we're going to be able to score goals. I don't think that's going to be an issue. If we can defend well and Flower plays the way he's played we got a chance to win every night."

The Capitals have lost four of five and are on the brink of dropping to fourth place in the Eastern Conference, while Vegas moved into a first-place Pacific Division tie with Edmonton, which has two games in hand and faces the Golden Knights three more times this season.

T.J. Oshie scored both goals for Washington in the third period. Braden Holtby made 26 saves.

It marked the sixth straight game the Capitals allowed the first goal.

"You can't say one word or write something on the board that will kind of get that going," Oshie said. "That has got to be the guys in the room here ... all the leaders. It's on us to have the boys ready and prepared to go."

Vegas got on the board in the opening minutes of the game when Holden tipped a pass from William Carrier for his fifth goal of the season. Smith made it 2-0 later in the period when he sliced into the slot and chipped in Jonathan Marchessault's pass over Holtby's shoulder. Pacioretty made it 3-0 when his one-timer slipped under Jonas Siegenthaler and past Holtby.

Oshie ruined Fleury's bid for a second-straight shutout when his wrist shot from the right circle went far side, top shelf of the 11:13 mark of the third period. Two minutes later, Oshie cut the deficit to one goal when his blistering one-timer on the power play put the Capitals back in the game.

But Vegas' defence was stellar down the stretch, as Fleury stopped five shots and his teammates blocked four others after Oshie's second goal.

"It's great for our team, it takes an effort and everyone to buy in."

NOTES: While much of the focus has been Ovechkin's milestone chase, Washington's John Carlson is just two points shy of passing Calle Johansson (474) for the most points by a defenceman in franchise history. Carlson assisted on Oshie's second goal. ... Holden's five goals are the most he's scored since netting 11 three seasons ago with the Rangers.