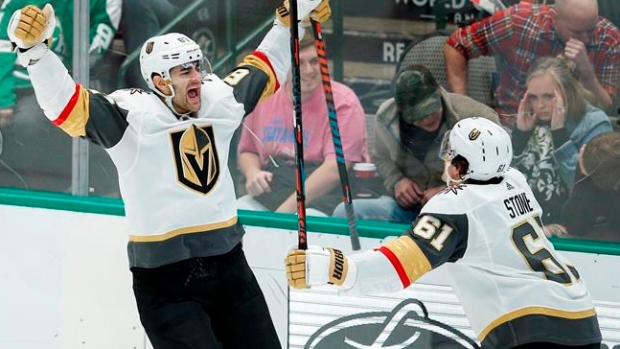 When Max Pacioretty was traded to the Vegas Golden Knights in September of 2018, there was plenty of debate as to which of the two franchises got the better end of the trade.

Pacioretty’s exodus from Montreal wasn’t pretty. At the time, Pacioretty – through his agent, Allan Walsh – maintained that he had no interest in leaving Montreal. The front office insisted that Pacioretty requested a trade during the 2017-18 season. It was a messy ending for a player who gave hundreds of games to the franchise that selected him as a first-round pick in the 2007 NHL Draft.

The trade itself was a fascinating one, if only because part of the return for Montreal – Vegas winger Tomas Tatar – had an unexpectedly explosive 2018-19 campaign. From playoff healthy scratch to top-line producer, Tatar’s spike in production appeared to tilt the trade in favour of Montreal. Keep in mind, this Canadiens team still had top prospect Nick Suzuki and a second-round pick en route. (The 20-year-old Suzuki has been fantastic in his rookie season.)

And the 2018-19 season, at least for some time, wasn’t Pacioretty’s best. He amassed 40 points in a 66-game season and was moved around the lineup as Gerard Gallant searched for a proper fit.

Then, the Mark Stone trade happened.

So much of creating formidable lineups in the NHL is about finding complementary skill sets. When the Golden Knights acquired Stone, it was an obvious move – he was an established superstar and perhaps the best defensive forward in the league, and became available at a time when the Golden Knights were both competitive and armed with cap space.

But it was also an interesting add from a personnel standpoint – Pacioretty, a high-end goal scorer with defensive limitations, paired with a defensively sound winger sounded like a logical play.

Pacioretty has been on fire since the acquisition of Stone – and that’s particularly true since opening night of the 2019-20 season. Pacioretty currently leads the team in scoring (15th across the entire NHL) with 15 goals and 20 assists in 37 games. A lot of that success is because his line – more on this in a moment – is living in the offensive zone. Through Wednesday’s games, only Alex Ovechkin (165) and Nathan MacKinnon (162) have taken more shots this season than Pacioretty (149).

There is a compelling argument that he’s been the single most impactful skater in the Golden Knights lineup – Evolving Hockey’s regression based Goals Above Replacement model (which isolates each player’s offensive and defensive contributions to the roster) has him in the 93rd percentile amongst forwards around the league, and the top contributor for Vegas this season: 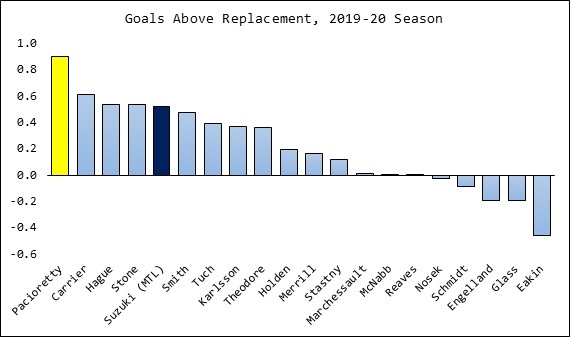 We know Pacioretty is individually producing and regression-based models see Pacioretty as having a demonstrably favourable impact on his teammates. But there is nothing more interesting in the fact that Gallant appears to have stumbled on a two-player relationship that is so perfectly complementary, it has spiked the performance of both.

Consider the on-ice numbers of Pacioretty and Stone since the Feb. 25 trade. Whereas Pacioretty and Stone have seen around average results when separated from one another over approximately 56 games, their numbers are explosive when together. In those minutes (about 600 since the time of the trade), the Golden Knights are getting just under 60 per cent of the shots, expected goals, and actual goals at 5-on-5: 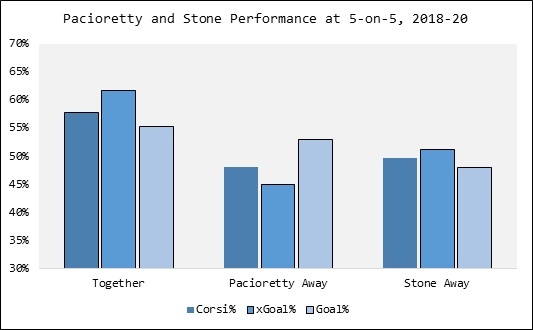 Years from now, it appears increasingly likely we will render this trade a win for both sides of the table. Montreal, unable to salvage a relationship between one of their premier forwards who was perhaps unwilling to sign a long-term deal, secured both current (Tatar) and future (Suzuki) assets as they continued through their transition years. Both players have met or exceeded expectations since the time of the trade.

But Vegas comes off looking great, too. No player has been more important for the Golden Knights this season than the former Canadiens captain, and in the midst of what appears to be a career year, he can thank a change of scenery and a superstar-calibre teammate for his hockey renaissance.