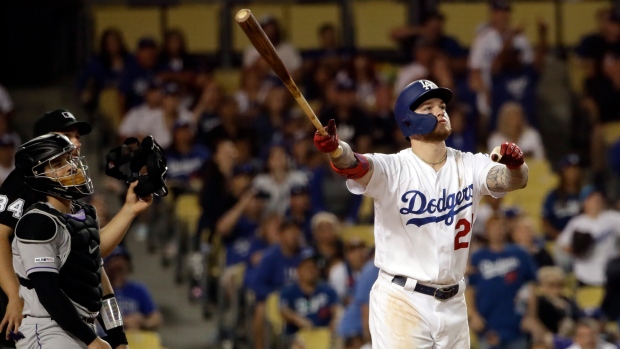 LOS ANGELES — Alex Verdugo is not afraid of the big moments, a rookie who wants to receive the postgame Gatorade dunks.

Verdugo got his wish on Saturday. The centre fielder hit his second home run of the game in the 11th inning to give the Dodgers a 5-4 victory over the Colorado Rockies.

"This guy loves the big moment. He doesn't run from it," manager Dave Roberts said. "So to have a young player with that kind of confidence, who's not afraid to fail, with his talent and energy . It couldn't have ended better for us."

It was the second straight night the Dodgers won with the long ball by a rookie. Matt Beaty ended Friday's game with a two-run shot in the ninth inning. Beaty and Verdugo are the first set of rookie teammates with walk-off homers in back-to-back games, according to the Elias Sports Bureau.

Verdugo hit a fastball from Jesus Tinoco (0-1) into the Rockies' bullpen in right field for his fourth hit of the game and first game-ending homer. It was his first multihomer game.

"I got a little in front and under it and good things happen," said Verdugo, who has three of his seven homers against the Rockies. "It felt good off the bat. I hit it decent but I didn't know if I got enough of it to get out."

Raimel Tapia's pinch-hit home run in the seventh had given the Rockies a 4-3 lead, but Beaty tied it at 4 in the eighth with an RBI single for his third hit.

Dodgers lefty Hyun-Jin Ryu, who was trying to become the first 10-game winner in the NL, allowed three runs for the first time this season. However, only one was earned. Ryu worked six innings and surrendered six hits with one walk and six strikeouts.

"We've leaned on them a lot these four, five days, and they responded to a man. We didn't play a good game today. We didn't catch the ball. We gave them extra outs," Roberts said. "To Hyun-Jin's credit, to limit damage and get six innings, to continue to make pitches, to not get frustrated . it wasn't a well-played game by us, but to find a way to win, it says a lot about those guys in that room."

Colorado's Ian Desmond had his first four-hit game since 2016, when he was with Texas. The centre fielder came into the game 0 for 15 against LA this season.

"I thought we had some good at-bats. We had good swings against them," manager Bud Black said. "We are playing them toe to toe. But when you have the record they do, that's usually an indication that they are a pretty good team."

The Dodgers are 53-25 — the second-best start in franchise history — and have a 12-game lead over the Rockies in the NL West. Los Angeles has won 10 straight over Colorado and is 8-2 on its current homestand.

Colorado took a 1-0 lead in the first when Nolan Arenado's two-out single to left drove in Desmond. It was the first time since May 1 that Ryu had surrendered a run in the opening frame. It also snapped a streak of 34 2/3 innings where he had not allowed an earned run at home.

The Dodgers answered in the second when Max Muncy led off with a double and scored on Chris Taylor's single.

Colorado scored twice in the third. Pitcher Peter Lambert started the inning with a single and advanced to second when shortstop Taylor bobbled the throw from first baseman Joc Pederson. Lambert scored on Desmond's single and Charlie Blackmon, who reached base earlier on the Taylor error, made it 3-1 when Daniel Murphy beat out a grounder that could have been a double play.

The Dodgers rallied to even it at 3 thanks to Verdugo. He doubled to start the third inning and was driven in on Justin Turner's single. The centre fielder then homered to left-centre on a first-pitch fastball from Lambert to tie it in the fifth.

Lambert, who grew up in San Dimas, bounced back after giving up eight runs last Sunday at San Diego. The right-hander allowed three runs on seven hits in his fourth major league start and first against the Dodgers.

Tapia's solo shot to left-centre on Caleb Ferguson's curveball in the seventh inning was his second pinch-hit homer of the season and third of his career.

Blackmon went 0 for 4 and had his 31-game on-base streak snapped. .... Muncy extended his hit streak to 10 games and has reached base safety in 31 straight, which is the longest active streak in the NL. ... Lambert had two hits and is 5 for 8 at the plate. He is the eighth pitcher in franchise history with multi-hit efforts in two straight games. ... The Rockies have six pinch-hit homers, which is tied for third in the majors.

Dodgers: Roberts said there is a possibility that OF A.J. Pollock could return after the All-Star break. Pollock has been out since April 30 due to right elbow inflammation.