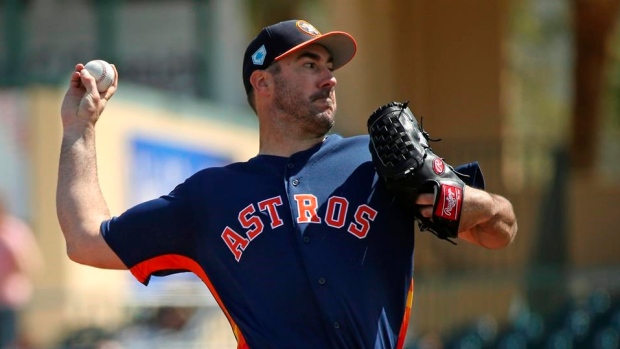 WEST PALM BEACH, Fla. — Justin Verlander thinks the free-agent process is broken. Still, he says that's not why he decided to sign a new deal with the Houston Astros rather than test the market.

"I can't see a better situation," Verlander said Sunday after the Astros announced a three-year contract that added $66 million in guaranteed money for 2020 and '21.

A 36-year-old right-hander, Verlander had been due $28 million in 2019, the final guaranteed season of a $180 million, seven-year deal he signed with Detroit before the 2013 season.

His new deal followed two straight slow free-agent markets and came after agreements during spring training on long-term deals for Colorado third baseman Nolan Arenado, Boston left-hander Chris Sale and St. Louis first baseman Paul Goldschmidt, who all would have been part of the free-agent class after this season. In addition, the Los Angeles Angels gave a record $426.5 million, 12-year contract to outfielder Mike Trout, who could have become a free agent after the 2020 season.

Verlander called these deals "a new wave in baseball."

"Teams are understanding the situation that they're in when they have a player in house," he said. "There's a mutual leverage there for both sides to get something done."

Verlander, 36-year-old right-hander who won the 2011 AL MVP and Cy Young Award, is among the highest-paid pitchers. Washington's Max Scherzer gets $35 million in each of those seasons and Arizona's Zack Greinke $32 million, though both of them have deferred money.

"It was something that was important to me," Verlander said.

Houston acquired Verlander from Detroit on Aug. 31, 2017, and he helped the Astros win their first World Series title.

"We all think back to 2017 when Justin arrived in our city and our fans were dealing with the devastating results of Hurricane Harvey, and Justin Verlander came in and helped us all transition from that time of tragedy and that time of despair to a special moment of celebration for the Houston Astros and for the city of Houston and for the state of Texas," Astros general manager Jeff Luhnow said.

Houston made major investments in the past week, agreeing to a $20.4 million, three-year contract with right-hander Ryan Presley, a $100 million, five-year deal for third baseman Alex Bregman that covers 2020-24 and now the deal with Verlander. A seven-time All-Star, he was 46-37 during his last four years with the Tigers and has rebounded to go 21-9 with the Astros. He was 16-9 with a 2.52 ERA in 34 starts last year, pitched 214 innings and led the AL with 290 strikeouts.

Verlander vowed this contract won't be his last.