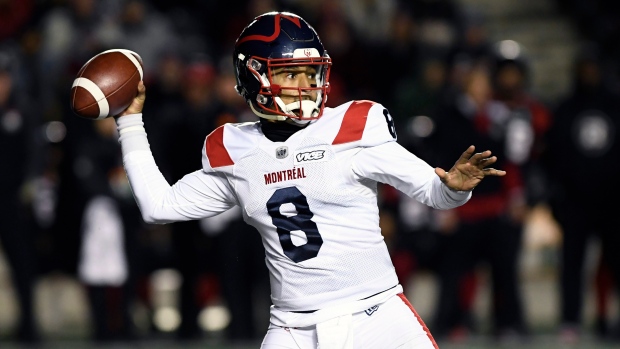 OTTAWA — The smile on Khari Jones's face said it all.

The Montreal Alouettes head coach had just watched his team earn a 42-32 win over the Ottawa Redblacks to wrap up the regular season with a winning record for the first time since 2012. Jones was named interim head coach a week before the regular season started, but his impact was swift and a huge reason for this Alouettes' team success.

Vernon Adams Jr. started the game for Montreal and was 13 for 16 for 126 yards and two touchdowns and grabbed Jones in a bear hug at the game's conclusion.

"We love that guy," said Adams. "He's a great leader. This is the closest this group has ever been and we believe in him and each other."

Montreal (10-8) hosts the Edmonton Eskimos in the East semifinal on Nov. 10 and the Alouettes wanted to head into the playoffs on a winning note.

"It was a tough win and there were a lot of things we could have done better," said Jones. "It just kind of encompasses what this team has been about. We've fought and we battle to the end in almost every win and loss and it's fun to see these guys. I told them I'm really proud of them to come from where a lot of people didn't think we'd even compete to being a winning football team."

With the playoffs the priority Matthew Shiltz took over for Adams in the second quarter and finished the game 9 for 12 for 101 yards and one touchdown.

The Redblacks (3-15) played one of their best games of the season, but finished the year with 11 straight losses. Ottawa had the worst home record (1-8) since Winnipeg and Edmonton in 2013.

The best news of the night for the Redblacks came early in the first quarter when they announced two-year contract extensions for wide receiver Brad Sinopoli, defensive back Jean-Philippe Bolduc, offensive lineman Alex Mateas, defensive lineman Nigel Romick and running back Brendan Gillanders. In an unusual move, the news was posted on the big screen inside the stadium.

"I love this place, I love this organization," said Sinopoli. "This year doesn't define what this is. It's just a bump along the road. It was a tough year, but I'm looking forward to the next one."

Sinopoli said the new deal came together quickly once he let management know he wanted to remain with the Redblacks.

There is no denying this has been a challenging season and head coach Rick Campbell admitted there's a sense of relief now that it's officially over.

"Some healing needs to take place around this place," said Campbell. "The losing is a wear and tear and the stuff that's gone on. I think it's a good thing that we can move forward and this franchise can move forward."

Ottawa used all three of its quarterbacks. Dominique Davis played the first half and was 16 for 18 for 155 yards, before getting injured. Will Arndt played most of the second half and finished 17 for 25 for 161 yards and one interception, but it was Jonathan Jennings who had three rushing TD's.

Leading 17-11, Montreal wasted no time piling on as Shiltz connected with Dante Absher for a 13-yard TD pass on the opening drive of the second half and then added a single on the kickoff.

R.J. Harris appeared to score a touchdown shortly after, but upon review it was ruled he was down at the one-yard line. The Redblacks still scored on the next play to make it 25-18.

Ottawa made it a game after Jennings rushed for his second TD early in the fourth quarter to make it 28-24, but Jarveon Williams ran in a 35-yard touchdown to extend the Alouettes lead.

Trailing 35-24 Jennings picked up his third TD with just over one minute in regulation. A two-point convert by John Crockett made it 35-32, but a late interception by Najee Murray for a defensive TD sealed the win for Montreal.

"The one thing that this team has shown is that we just fight and battle and I wanted to see that for these last couple of games," said Jones. "I don't feel we're at the point where we can take a game off and just come in and play the playoff game and just turn it on again. I like the fight that we showed."

In many ways that one play was a synopsis of the Redblacks season.

"We do try and we keep fighting and then we just can't seem to find that play or two to swing the tide in our favour," said Campbell. "I don't question people's effort or want to, but sometimes we've got to make a few more plays."

Montreal dominated the first half as they scored two touchdowns and three singles to take a 17-11 lead.

Adams connected with Eugene Lewis on the opening drive for a five-yard TD pass and then found Jake Wieneke early in the second quarter to give Montreal the lead.

The Redblacks continued to struggle and settled for three field goals, with the most impressive being a 47-yard kick by Lewis Ward late in the second quarter. He was also successful from 27 and 18 yards.