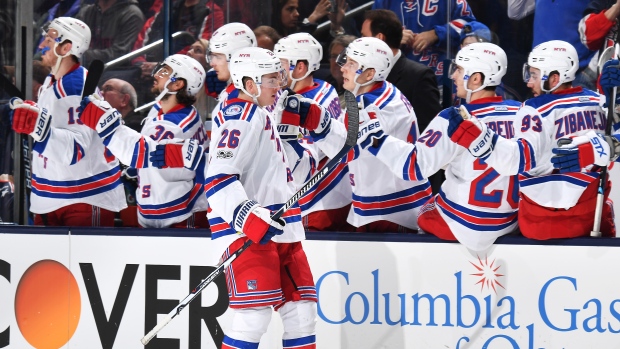 COLUMBUS, Ohio — Rangers goalie Antti Raanta hadn't started in more than six weeks because of injury and the reliable play of Henrik Lundqvist.

The Columbus Blue Jackets came after him Monday night, but Raanta was on his game. He stopped 30 shots — including key saves in the final minute after the Blue Jackets pulled their goalie and were swarming the net — to lead New York to a 3-2 victory.

"When (Lundqvist) is playing at that level, it's tough to get games, but it was really fun to get (in) there and just play," said Raanta, who was making just his third appearance since Dec. 29. "It's been a long time when I played, and I just wanted to get that good feeling going again."

Jimmy Vesey scored the go-ahead goal in the third period, and Dan Girardi and Kevin Hayes also scored for the Rangers, who won their sixth straight game and moved into a three-way tie for second place with Columbus and Pittsburgh in the tough Metropolitan Division.

"We did what we have to do here," Rangers coach Alain Vigneault said. "We found a way to win, and we had a few of their guys maybe not having their top game. And usually that's the sign of a good team when you can win a game when you're not really at your best as far as execution. It's not a bad sign."

Hayes put the Rangers up 2-1 after stripping the puck from David Savard and on a breakaway 4:49 into the third period.

Foligno knotted the score again with 8:07 left in regulation.

Vesey then got the game-winner less than two minutes later with a wrister from the bottom of the right circle.

Columbus coach John Tortorella said the Blue Jackets played well, but gave away what he called "free stuff" — including a short-handed goal by Girardi 12 seconds into the second period, and the breakaway by Hayes in the third.

"It's a tough one to eat," Tortorella said. "This is a tough loss because I thought we played really well."

Columbus got on the board 8:12 into the game, just as New York's Pavel Buchnevich was leaving the penalty box. Brandon Saad caught up with a rebound off the back board and shovelled it out to Dubinsky, who beat Raanta from 14 feet out.

Girardi said the Rangers will take the wins any way they can get them.

"We've got to keep building here," he said. "We're doing a lot of good things each game and playing really good defensively and keeping our scoring chances down resulting in some wins. So we've just got to do that every night and ride the wave here."

NOTES: New York's last loss was Jan. 31 against the Blue Jackets. ... The Columbus Dispatch reported that players requested a meeting to ask Tortorella to be more constructive in his criticism. Tortorella and Foligno said the report was "blown out of proportion." ... Columbus on Monday recalled G Joonas Korpisalo from Cleveland of the American Hockey League and moved G Anton Forsberg back down. ... Columbus F Scott Hartnell left the game in the first period and didn't return after he slammed into the back board hard after racing New York's Nick Holden hard to a loose puck. The team said he's got a "lower body" injury. "It was a just a shock to his body, how hard he hit," Tortorella said.

New York: At the New York Islanders on Thursday, the second of three straight games against Metropolitan Division opponents.