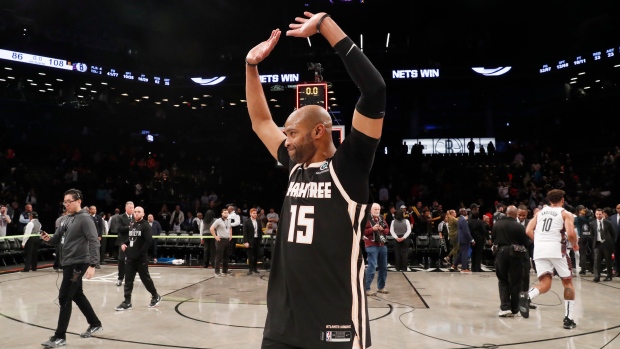 Carter had actually turned 43 on Sunday, the same day retired Los Angeles Lakers legend Kobe Bryant and his 13-year-old daughter Gianna died in a helicopter crash, and the entire NBA was in mourning.

He initially believed Sunday's game against visiting Washington should've been cancelled, but the 152-133 win over the Wizards ended up being cathartic, and perhaps the best way to honour Bryant.

The former longtime Raptor was back in Toronto on Tuesday for his penultimate game in the city where his NBA career began. So Raptors fans who loved/hated/then loved the superstar dubbed "half man, half amazing" will have one last time to say so long when the Hawks play in Toronto on April 10.

"The next (game in Toronto) is my last," Carter said. "This is the easy one in my mind."

Carter received a standing ovation Tuesday during a video tribute in Atlanta's 130-114 loss. On the Hawks' first possession to start the second, he hit a moon shot over OG Anunoby, and then grinned like a child when the ball dropped through the hoop.

He is tied with Dirk Nowitzki for third place on the league's all-time games played list.

The NBA is still reeling from Bryant's death. His impact in the league was like few others. When he and the Lakers played in Toronto, there were often as many gold and purple Bryant jerseys in the crowd as Raptors shirts.

"He was a star," Carter said. "So regardless if he played for your favourite team or not you had an appreciation for him. It was like when Michael Jordan would come to town. . . obviously there were towns where you hated him and wouldn't dare wear a Kobe jersey, (like) Sacramento, but you still respected him for his drive and for his willingness to be the best and to try to win by any means.

"So it was something special (to play Bryant) and to battle him head up was what it was all about, man. It wasn't like, 'Ah man, I gotta play Kobe.' It was more like, 'I better be ready for Kobe or my job might be blown up.'"

Drafted in 1998, Carter played just over six seasons for the Raptors before they traded the eight-time all-star to New Jersey. He recently became the first NBAer in history to play in games spanning four decades.

Carter was Public Enemy No. 1 in Toronto for a long time after he left, but fans have since warmed up to the man who was a huge reason why Canada is now rich in young basketball talent.

He said it's "always special," to play north of the border. Carter said he likes to educate his young teammates about the history of each city in which they play, particularly Toronto.

"We try to play the music of the city where we're playing so Drake got a little love today," Carter said. "They look up at the rafters, see that (NBA championship) banner here and the other one over there too from when the arena opened. I was a part of that.

"I always give them a history lesson and I hold it near and dear to me. And I do think about the fact that I was the first person to score a basket in this arena. . . It was surreal at that moment, and that's forever etched in the history of this building and that's special."

There is one memorable Raptors game was happily not to have been a part of. He was traded about a year before Bryant exploded for 81 points against the Raptors — the second most points in a game in NBA history. Carter was still close with former teammates Jalen Rose and Morris Peterson at the time, and watched the game with keen interest.

"I was glad I missed that," Carter laughed Tuesday. "It's easy when you're sitting at home, (to say) 'Just double-team him.' Well if you’re watching, they were trying to send double-teams. When a guy is in a moment, rhythm like that, I've never scored 81 points, I've scored 60-something in some summer games.

"You watch Kobe Bryant playing the game like he was playing against college, high school guys. He was scoring at will like that, it was just amazing to see, and I was like, 'Hooooo!' Imagine what would be said about me if I was still in that game. I'm fouling him out. I'm gonna foul out first."