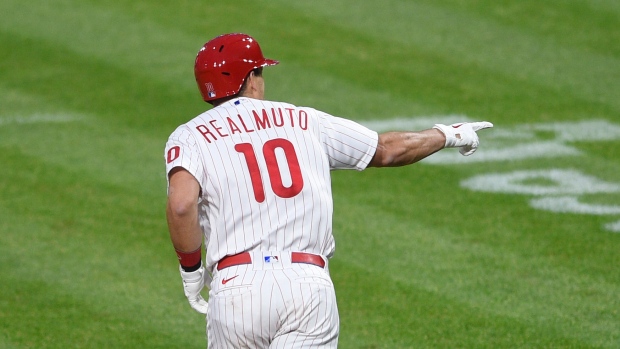 Velasquez (1-0) allowed one run and four hits, striking out six in his longest outing this season. Neris struck out Lorenzo Cain with the bases loaded in the ninth to preserve the win.

“It’s a gutsy performance by Hector,” Phillies manager Joe Girardi said. “I mean, I don’t ever like to let a pitcher go that many pitches. He looked over and said, ‘I got this.’ That was his last hitter no matter what. So, obviously he did a heck of a job.”

Cain blasted a solo homer onto the concourse behind the left-centre field stands to give the Brewers a 1-0 lead in the first in his first at-bat off the injury list. But NL Central-leading Milwaukee couldn’t do anything else until Philadelphia went to the bullpen.

Sam Coonrod struck out the side in the seventh but the Brewers loaded the bases the next two innings. Connor Brogdon walked two and yielded an infield single to Christian Yelich in the eighth.

Neris then picked Garcia off first to end the inning and threw 36 pitches in the ninth to earn his sixth save in seven chances.

Daniel Vogelbach lined a double to start the ninth and Pablo Reyes ran for him. Neris struck out Luis Urias and Luke Maile swinging. Pinch-hitter Billy McKinney walked and Kolten Wong reached on an infield single to load the bases. Cain went down on a checked-swing to end the game.

“You have to win this game, especially when your closer does something like that,” Girardi said.

Realmuto crushed his third homer into the second deck in left to give the Phillies a 2-1 lead in the first.

Roman Quinn drove an RBI triple the opposite way in the second and scored on Velasquez’s infield grounder to make it 4-1. Both runs were unearned because of a throwing error on shortstop Luis Urias that allowed Odubel Herrera to reach second safely following his grounder.

Houser settled in nicely after the second and retired 13 in a row and 14 of his last 15 hitters.

“I didn’t have my best stuff,” Houser said. “I had two pitches going. I had to battle out there. My mechanics started to get going.”

Brewers: Slumping 1B Keston Hiura and OF Tyrone Taylor were sent to the alternate training site to make room for Yelich and Cain. ... RHP Phil Bickford was claimed off waivers by the Los Angeles Dodgers.