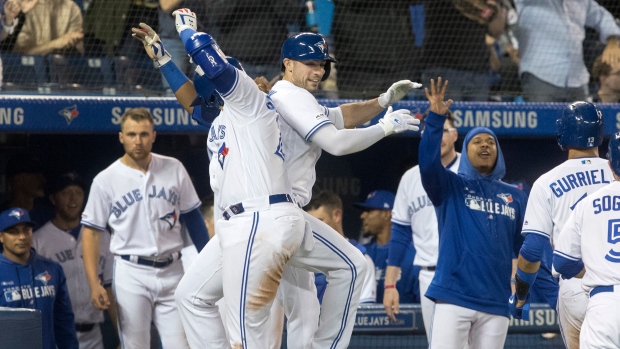 TORONTO — Vladimir Guerrero Jr.'s teammates know to not to miss the star rookie's at-bats, especially when the game can be altered with one of his potent swings.

Guerrero didn't disappoint Wednesday night, launching a line drive to straightaway centre field in the eighth inning to score three runs and help the Blue Jays rally for an 11-7 comeback victory over the New York Yankees.

"We're all champing at the bit like 'what's going to happen now?'" starter Trent Thornton said of the feeling when Guerrero steps to the plate. "When he does stuff like that, it's not really a surprise but it's always awesome."

"That's the feeling you have any time he goes with the game on the line, you have a feeling he has a chance to do something like that," said Blue Jays manager Charlie Montoyo.

Guerrero played it cool after the game, saying he was just trying to do his job.

Randal Grichuk followed two batters later with his second homer of the game and Brandon Drury hit another to put the Blue Jays (23-38) up by four.

Teoscar Hernandez, in his first game since being recalled from triple-A Buffalo, began the rally with a two-run double in the seventh inning to bring Toronto within a run at 7-6. It was his second double of the night after also hitting one in the first inning.

Cavan Biggio hit an RBI single and Lourdes Gurriel Jr. scored on an error on the 30th anniversary of the first game played at Rogers Centre. Reliever Sam Gaviglio (4-1) earned the win.

DJ LeMahieu had given the Yankees (38-22) a 7-4 lead with a three-run homer in the sixth. Gary Sanchez hit a solo shot and Cameron Maybin drove in another run.

Paxton, acquired from Seattle in the off-season, was making his second start since coming back from the injured list. The towering lefty from Ladner, B.C., missed 23 games with knee inflammation.

"Just one of those days where I didn't quite have the bite on my breaking stuff and wasn't locating my fastball very well," Paxton said.

Toronto, which won the first game of the three-game series Tuesday night, assured itself a series victory for the first time since sweeping Oakland from April 26-28.

Montoyo said the back-to-back wins versus the top team in the AL East should help the Blue Jays turn the page on what's been a rough stretch of the season.

Toronto came into Wednesday's matchup having lost 10 of its last 13 games.

Hernandez made his return to the big league lineup, starting in centre field for the first time this season. General manager Ross Atkins said before the game that the Jays wanted to give Hernandez time in centre, where he'd made appearances in 20 of his 217 major league games heading into Wednesday.

"He looked great, two hits, he played really good defence," Thornton said of Hernandez. "That's why he's here, because he's good. That was a really big part of our win today."

NOTES: The Blue Jays selected pitcher Braden Halladay, the son of late ace Roy Halladay, in the 32nd round of the MLB draft earlier Wednesday. ... The Blue Jays and Yankees close out their three-game series Thursday. Former Toronto lefty J.A. Happ starts for New York. Edwin Jackson will start for the Jays.