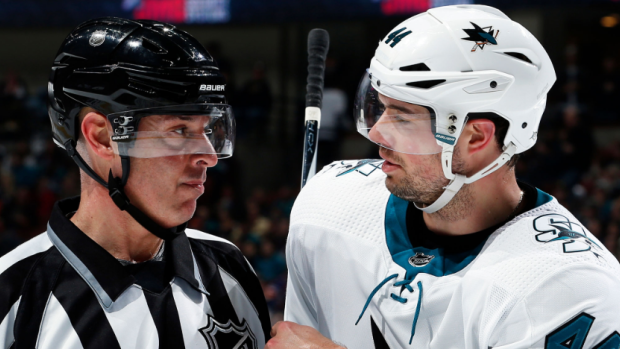 San Jose Sharks defenceman Marc-Edouard Vlasic said Sunday he’s expecting an apology from the NHL after Colorado Avalanche defenceman Tyson Barrie scored shortly after an icing call was waived off in the second period of Game 2.

With the two teams tied 1-1 in the second frame, Avalanche defenceman Nikita Zadorov flipped the puck from his own end to behind the Sharks’ net. Vlasic appeared to have a step on Avalanche forward Mikko Rantanen but the linesman called off icing, allowing Rantanen to centre the puck to Gabriel Landeskog and Barrie to score off the rebound from Landeskog’s shot. The Avalanche went on to win the game 4-3 to tie the series at 1-1.

Kevin Kurz of The Athletic reports that Vlasic said post-game that icing would have been the correct call and he expects to hear from the league Monday.

“Absolutely. I’ll take the high road and wait for the league’s apology tomorrow.”

Was that icing on the Barrie goal?

Vlasic: “It was the right call.”

Q: It was the right call?

“Absolutely. I’ll take the high road and wait for the league’s apology tomorrow.”

Sharks head coach Peter DeBoer struck a different tone post-game, however, calling on his players to learn from the play.

"Whether I thought it was [icing] or not doesn't matter; our players did," DeBoer said. "They let up. They relaxed for a minute. It obviously wasn't. I guess the lesson in that is don’t assume anything in the playoffs. Play, and make sure."