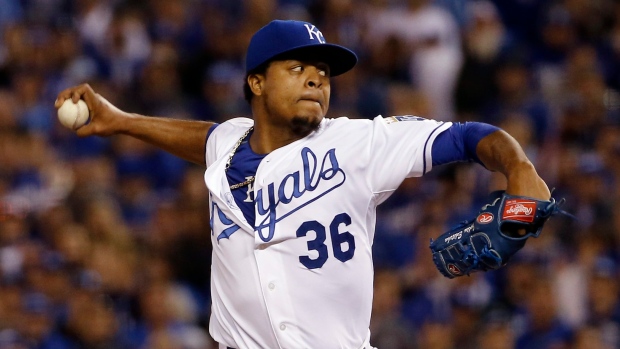 KANSAS CITY, Mo. - Toronto's Troy Tulowitzki noticed something different about Royals starter Edinson Volquez when he dug in for his first at-bat of the American League Championship Series.

Something you could only tell by standing in the batter's box — or holding a radar gun.

"I think his velocity was a little higher than it normally is," Tulowitzki said after an 0-for-4 night in a 5-0 Game 1 loss Friday night. "He was hitting his spots. He did a good job."

The Blue Jays' three hits were their fewest ever in a post-season game.

"Tonight was the Volquez show. He was tremendous," Toronto manager John Gibbons said. "He shut down a good-hitting team, I know that. His ball was ducking and darting everywhere."

Volquez normally pitches in the low 90s, but his fastball was nipping at 96 mph on Friday night. He didn't allow a hit until his 56th pitch, when Chris Colabello chopped a single up the middle with two outs in the fourth, snapping a post-season hitless streak of 10 2-3 innings for the Royals — one out shy of matching the record set by the New York Yankees in 1939.

The biggest of the Blue Jays' big bats made the quietest outs, too.

Jose Bautista went down looking in the fourth inning, while Edward Encarnacion struck out looking in the sixth. Donaldson managed a walk off Volquez but little else, while Tulowitzki — one of the Blue Jays' big deadline acquisitions — had two strikeouts.

"They got Game 1," Tulowitzki said, "but it's no time to press the panic button."

Alcides Escobar and Lorenzo Cain drove in runs off Estrada (1-1), while Eric Hosmer and Kendrys Morales tacked on two more off LaTroy Hawkins to put the game away.

"It's always great when you can take the lead — you pitch the first inning, you come back to the dugout and right from the get-go you score some runs," said Volquez, who had been 0-3 with an 8.76 ERA in three career post-season starts. "It's less pressure for everybody, I think."

As if the outcome wasn't bad enough for Toronto, Encarnacion, the designated hitter, left in the eighth inning to get X-rays on the middle finger of his left hand. The initial report was a strain of the ligament and Encarnacion was listed as day-to-day.

"He's been battling this thing," Gibbons said. "We'll see how it goes."

The Royals will try to take a 2-0 series lead when they send Yordano Ventura to the mound on Saturday. Toronto will counter with former Cy Young Award winner David Price.

The teams entered the best-of-seven series with plenty of history.

To start with, the defending AL champs beat Toronto in the 1985 league championship series, then beat the St. Louis Cardinals for the Royals' only World Series triumph. But far more recently were the tense, benches-clearing game that the teams played at Rogers Centre in August.

Volquez (1-1) was right in the thick of things.

The veteran starter kept pitching the Blue Jays inside, finally hitting Josh Donaldson with a fastball. Tensions escalated as the game went on, with Toronto reliever Aaron Sanchez returning the favour by hitting Escobar to trigger the first of two benches-clearing scuffles.

Afterward, Volquez said Donaldson was "crying like a baby" over his inside approach. And to nobody's surprise, Donaldson was booed lustily by the Kansas City crowd on Friday night.

That was the only reason for the packed house to boo, though.

After squandering a scoring chance in the first inning, the Royals jumped ahead in the third. Alex Gordon led off with a double, Escobar sent an RBI double down the right-field line, and Cain's two-out single helped Kansas City — so accustomed to playing from behind — to a 2-0 lead.

Perez added his third homer of the post-season on the first pitch he saw in the fourth, the cheering of the throaty, flag-waving crowd reaching a crescendo as it passed over the wall.

The Blue Jays never really threatened the lead the rest of the night.

"We were putting some balls in play. We hit some balls at guys. That's just the way it goes sometimes," Colabello said. "It's one game. We would have liked to be up 1-0, but we seem to do pretty good when we get behind."