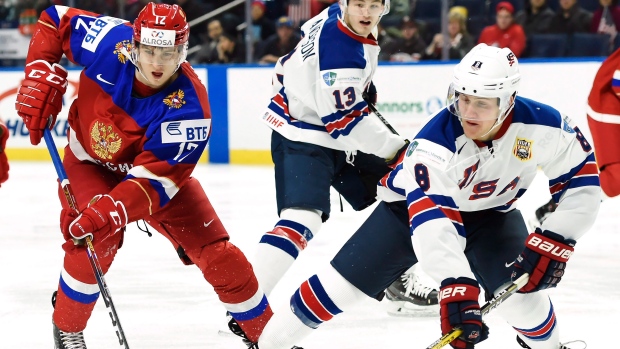 Carolina Hurricanes general manager Don Waddell said Tuesday his understanding remains that top blueline prospect Adam Fox has not made any decisions on his future just yet.

Waddell told TSN Hockey Insider Pierre LeBrun after Jeff Cox of the New England Hockey News tweeted that Fox had decided to return to Harvard for his senior season and favoured reaching unrestricted free agency in 2020 over signing with Carolina.

Hurricanes GM Don Waddell says just now that his understanding remains that Adam Fox has not yet decided. https://t.co/IytZumZIIS

The Hurricanes acquired Fox last summer along with Dougie Hamilton and Micheal Ferland from the Calgary Flames for Elias Lindholm and Noah Hanifin. The 21-year-old was a third-round pick of the Flames in 2016.

In 32 games with Harvard this season, Fox has nine goals and a team-leading 48 points with a plus-26 rating. Harvard is set to take on Massachusetts on Friday in the Northeast Regional semifinal of the NCAA Tournament.

The Jericho, N.Y., native dismissed rumours in December that he planned to spend his senior season at Harvard and sign with the New York Rangers next summer.

“I know people think I have some plan to sign with the Rangers because of where I grew up,” Fox told The Athletic. “But my dream, my goal, is to play in the NHL. As soon as possible.”

Fox also represented Team USA at the World Juniors in 2017 and 2018 and is one of 10 finalists for this year's Hobey Baker Award.

He was ranked No. 12 on TSN Director of Scouting Craig Button's annual list of the Top 50 NHL-affiliated prospects in January.