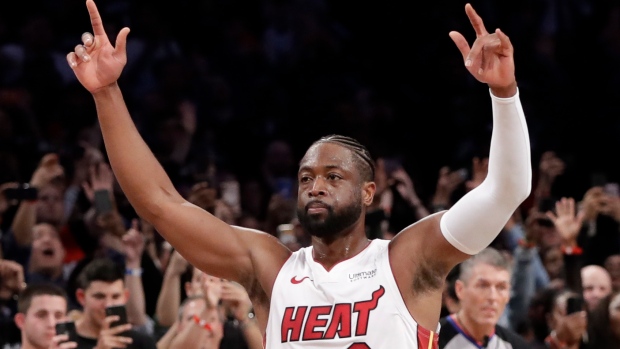 NEW YORK — Dwyane Wade was hurting, sitting on the training table trying to get enough treatment to get him on the floor one last time.

A couple of hours later, he looked like a guy capable of playing well beyond the final night of his career.

Wade had 25 points, 11 rebounds and 10 assists in his last NBA game, which the Brooklyn Nets won by beating the Miami Heat 113-94 on Wednesday night to finish 42-40 and clinch the No. 6 seed in the Eastern Conference.

With close friends LeBron James, Chris Paul and Carmelo Anthony leading the cheers from their courtside seats, Wade had his fifth career triple-double in three quarters. He fittingly secured it with a pass to Udonis Haslem, his teammate of 15 years who plays sparingly now and made his only start of the season.

"I was like, I don't know why, but everybody feels like now you've got to go out and score 60 in your last game because Kobe did it," said Wade, wearing a sparkling gold jacket and gold sneakers. "So hopefully I took the bar all the way back down and say let's go get a triple-double, that's easier."

A night after scoring 30 points in his final game in Miami, Wade showed one more time that he's walking away with his skills intact.

He played 36 minutes, dribbling out the shot clock the final time he had the ball before checking out with 10 seconds remaining. Then it was time for a lengthy postgame celebration on the court with teammates and friends.

"The man went out with a triple-double. Don't let that go unnoticed. He had a triple-double," All-Star D'Angelo Russell said. "He is a guy that paved the way for a lot of us. He's been with that franchise for that long period of time. He's Mr. Miami."

Russell had 21 points on seven 3-pointers for the Nets, who will face the third-seeded Philadelphia 76ers beginning this weekend in their first post-season appearance since 2015, one that seemed unlikely when they were 8-18 in December. But they went 34-22 from there for their first winning record since going 44-38 in 2013-14 — when they were knocked out by Wade's Heat in the second round.

The game mattered only to the Nets, who quickly ended any fears of finishing seventh and having to face the Toronto Raptors in the first round.

But that was secondary to a last chance to celebrate Wade, the three-time NBA champion who was ending his 16th and final NBA season.

He was loudly cheered from the moment he emerged alone from the tunnel for pregame layups. Fans — egged on at one point by Paul and Anthony — chanted "We want Wade! We want Wade!" when he was on the bench, even though the 37-year-old guard had played a season-high 35 minutes Tuesday and coach Erik Spoelstra warned before the game that it probably wouldn't be that way again.

But there was no keeping Wade down for long. It took him a little bit to get going, as Jarrett Allen added Wade to the list of stars whose shots he's blocked this season — a list that included James.

"I loved seeing CP and Melo over there getting the crowd going to get Dwyane back in there and Dwyane comes from the old-school NBA," Spoelstra said. "That was pre-load management, so we were not load managing him tonight and I was not talking to my sports scientist whether he could go, even though I walked in and saw him on that training table an hour before the game and he did not look fit to go, at all. But he's cut from a different cloth."

The Heat hoped the final game would matter, but the Nets and Orlando Magic had clinched spots over the weekend to leave only one spot left coming into the last week. Miami was eliminated from contention for it despite its victory Tuesday.

"For me, I'm happy with this season," Wade said. "Unfortunately for our organization and our team, we weren't able to put ourselves in a position to win enough games to be in the playoffs, but for what I wanted for this season, I'm happy to say that I completed that."

Nets: Starters Joe Harris (toe) and DeMarre Carroll (right wrist) sat out, though Atkinson said they would be ready for the playoff opener. ... Shabazz Napier scored 20 points off the bench.

Wade has been exchanging jerseys with players after games this season, but there was one missing. Anthony, who helped persuade Wade to return this season, didn't play long this season before parting ways with Houston. So Wade gave his final one to him.

"I didn't get an opportunity to play against Melo this year and exchange jerseys with him," Wade said. "That was a missing piece out of this whole season, so everything worked out great for him being here, for me having an opportunity to give him my jersey."

Nets: A first-round playoff matchup against the Philadelphia 76ers.