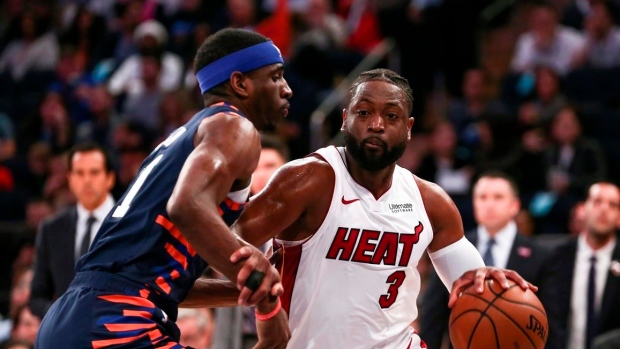 All of his children were there. Former President Barack Obama sent a video, one of many tributes. Fans came early and stayed late, chanting his name. His wife slapped his backside in recognition of his making a 3-pointer. He crashed into John Legend and Chrissy Teigen, dousing them with a beverage. He slipped twice as he tried to make his signature leap onto a courtside table postgame.

Oh, and he started.

And he scored 30 points.

Wade has played his last game in Miami, and on Wednesday will play his last game in the NBA when the Heat close this season in Brooklyn. There's no playoff appearance awaiting, no last post-season waltz to cap this season-long "One Last Dance" of his. He wakes up Wednesday as a basketball player for the final time. He wakes up Thursday as a retired basketball player.

After 16 seasons as an NBA player, after three championships, an almost-annual spot in the All-Star Game, a scoring title, three franchises, four children, an Olympic gold medal and 161 teammates, the end is here. He is ready for whatever comes next.

"Hopefully, I created enough for this state, for the city, for the fans here, for the young kids here," Wade said. "Hopefully, I can continue to be an inspiration for them, (after) being an individual who wasn't given everything, who the odds were stacked against. Even when I made it to the NBA, still had odds stacked against me. But I continued to believe in myself. I continued to put my head down and worked."

The work made him a star, and from there he became a legend — celebrated for what he's done on and off the court.

His last game in Miami didn't tip off until 7:50 p.m. Tributes started in the morning.

A Budweiser video showed Wade getting gifts from people — his mother, Jolinda Wade, and others including Andrea Ghersi, the sister of slain teen Joaquin "Guac" Oliver — in a nod to the way he's exchanged jerseys with fellow players all season. Gatorade aired a video starring Legend , who sang a tribute to Wade's No. 3. Heat President Pat Riley wrote a letter to Wade published in the game program, saying Wade will be loved "forever and for always."

Ghersi gave Wade her brother's jersey in the video, which was taped last week. The jersey — No. 3, of course — came with words scrawled in marker: "Please don't forget my brother."

There was a pregame series of events inside the arena. Wade addressed the crowd, thanking every teammate — even ones no longer on this season's roster — by name. Students from Marjory Stoneman Douglas High, where the Feb. 14, 2018, massacre left 17 dead, performed the national anthem. It was fitting that the kids from MSD were there; the tragedy touched Wade deeply and Oliver, one of the victims, was buried in a Wade jersey.

The end of the anthem was drowned out by cheers. Wade's face appeared on the video screens. The fans roared.

"Noooooooo," Wade said. "Y'all are not about to make me cry before this game."

His wife Gabrielle Union-Wade, Heat coach Erik Spoelstra, former Heat greats Shaquille O'Neal and LeBron James, Heat teammate Udonis Haslem and Riley narrated a 5-minute pregame video. Hardly anyone was sitting. Even the 76ers stayed on the floor and watched, looking up the whole time. Zaire Wade, his oldest son, introduced his dad in the same way that his father taped his famous "From Robbins, Illinois" commercial nearly 15 years ago.

"This city will always be proud to rep your name across our backs," Riley said.

Obama — like Wade, a proud Chicagoan — sent a taped message as well, playing during the first timeout.

"I hope that the next phase of your life is just as fulfilling and just as spectacular as this one has been," Obama said.

Wade "L3GACY" shirts were given to fans, some of whom spent thousands of dollars for their seats. They got Wade commemorative lanyards. They bought Wade apparel. Some arena workers asked if they could be excused from wearing the usual game-night garb and don Wade jerseys instead. Fans flew in from as far as Australia and China. NBA Commissioner Adam Silver sent his regards in a video.

There also was a game, which seemed ancillary. The first shot? A dunk, by Wade. The decision for him to start was made by him and Spoelstra about six hours before gametime. The reason? They wanted that moment, one more time.

"I don't want this to end," said Spoelstra, who arrived for work Tuesday wearing a shirt with a photo of the scene that followed Wade's game-winning shot against Golden State emblazoned across his chest. "I'm literally having more fun this year and last year than in any of the other years with Dwyane."

They are the same in so many ways, Wade and Spoelstra. Both came to the Heat as unsure young men. Both have three championship rings now. Both are likely for the Basketball Hall of Fame. When Spoelstra was promoted to head coach in April 2008, he was unsure if he'd be able to handle the job — until he met with Wade a few months later and got pumped full of confidence.

"That's what great players do," Spoelstra said. "You talk about Hall of Fame players, they make the other players around them better. Well, great, Hall of Fame, superstar players also make their coaches better. And that's what Dwyane did."

Wade is beloved in Miami, of course, for obvious reasons. Beloved in Chicago, too, his hometown. Beloved in Milwaukee, where he took Marquette to a Final Four in 2003.

And this farewell tour — the "One Last Dance" — is a league-wide victory lap for someone NBA players rave about.

Wade isn't 2008 Wade, or Big 3-era Wade, or NBA Finals MVP Wade anymore. But he's still superb, and with a flair for the dramatic — such as the buzzer-beater to top Golden State a few weeks ago. He's been the best Heat player all season. It's hard to imagine how Miami will replace him, because he is going to be clearly missed.

But that's also part of the reason why this season is his last. Wade didn't want to go out as a shell of his former self. He wanted to leave the stage with the fans clamouring for more, and that is precisely what has occurred.

There's more to come for him in Miami. It just won't be in a No. 3 uniform.

"This city means everything to me," Wade said. "It's forever, forever, forever going to be my home. This is the end of the basketball part of me, but there's so much I want to do in this city. So much more that we can accomplish together. I definitely look forward to that."