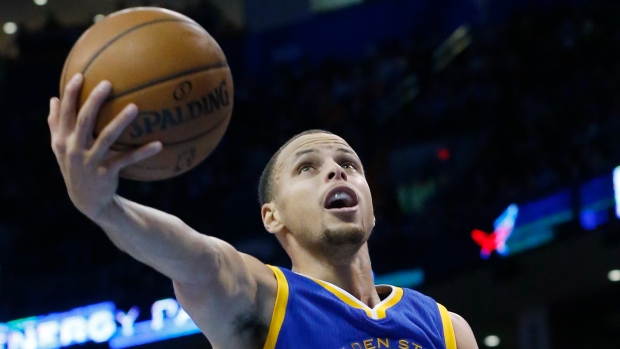 CHARLOTTE, N.C. - Coach Steve Kerr knew when he arrived at Golden State that Marreese Speights would figure into the mix somehow this season with the Warriors.

He never envisioned how big of an impact Speights would have in the team's 13-2 start.

"I figured he was a guy who could give us a spark off the bench every now and again, but I didn't see him as our full-time backup centre. ... but Mo has been way better than I expected," Kerr said.

Kerr even sat out Speights early in the season, saying "because I'm an idiot." He said he's not going to make the same mistake again.

Speights scored 16 of his 27 points to start the fourth quarter, helping the Warriors beat the Charlotte Hornets 106-101 on Friday night for their eighth straight win.

"He saved us again," Kerr said. "It's like the fourth time he's saved us. He's just having a terrific season."

Stephen Curry finished with 26 points despite a poor shooting night from 3-point range, and Klay Thompson added 17 points for the Warriors (13-2).

"We were struggling to find a rhythm and he came in and dominated, took over the game," Curry said of Speights. "He basically won us the game. Without him tonight our team doesn't even come close."

Said Speights: "I think it shows we got a deep team."

Brian Roberts scored 20 points and Al Jefferson had 18 points for the struggling Hornets (4-13), who have lost eight straight games and 10 of their last 11. Cody Zeller had 15 points and 14 rebounds and Kemba Walker had 13 points and 13 rebounds.

Curry, making his return to Charlotte where he played high school basketball and starred at nearby Davidson College, made his first 3-pointer then missed his final nine. He still finished 9 of 20 from the field and made all seven free throw attempts.

The Warriors out-rebounded the Hornets 16-8 on the offensive glass.

"It never matters how well you play if you're going to get tattooed on the glass," Hornets coach Steve Clifford said.

The Warriors came in having outscored opponents by an average of nearly 15 points during their winning streak, but entered the fourth quarter trailing 80-74.

Then Speights got hot.

The six-year NBA veteran scored his team's first 16 points of the fourth quarter on 8-of-9 shooting — most of those coming on mid-range jump shots — and the Warriors took a 90-88 lead with five minutes remaining.

"When I'm in a zone, the basket looks like a swimming pool," Speights said.

Thompson knocked down a 3-pointer and Curry scored on two run outs as the Warriors pushed the lead to 97-90. Curry was 6 for 6 from the foul line in the final two minutes to seal the victory.

Curry, who had 19 points and nine assists in Golden State's 25-point win over Charlotte earlier this season, entered the game with a hot hand. He scored 28 points against Orlando and 40 against Miami earlier this week.

But after a quick eight points, Curry cooled off and went to the bench with 3:47 left in the first half after picking up his third foul. The Hornets tried to attack Curry in the second half, but he stayed out of more foul trouble.

Warriors: Speights has 20 or more points in three games this season off the bench.

Hornets: Zeller started in place of Marvin Williams, who is out with a strained shoulder. Williams will sit out Saturday night at Atlanta, too.

RUNNING OF THE BULLS: Kerr interrupted his post-game press conference twice in the hallway outside the Warriors' locker room to say hello to former Chicago Bulls teammates -- first to Dickey Simpkins and then Hornets owner Michael Jordan. Jordan hugged Kerr and told him "keep up the good work, kid." After Jordan walked away, Kerr turned to the media and said, "Where's (Scottie) Pippen?"

Warriors: Play at Detroit on Sunday.

Hornets: Play at Atlanta on Saturday.