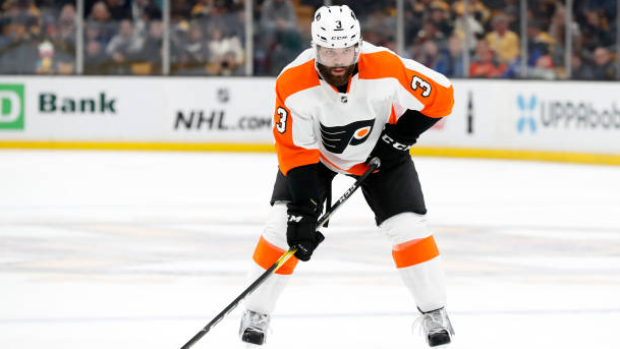 The Flyers acquired Matt Niskanen from the Capitals for Radko Gudas on Friday in a one-for-one swap of defencemen that upgrades Philadelphia's blue line offence and gives Washington much needed salary-cap space.

Niskanen provides the Flyers with an offensive-minded, right-handed shot who can also help on the power play. Philadelphia is retaining 30% of Gudas' $3.35 million cap hit, which means Washington saves $3.405 million going into an off-season with several players in need of new contracts.

"We feel this move provides us with financial flexibility as we look for additional ways to strengthen our team," Capitals general manager Brian MacLellan said. "In addition, we are pleased to welcome Radko to our organization. Radko is a good defensive defenceman that plays a competitive, physical game."

Gudas, 29, is a big, bruising defenceman who could help the Capitals replace some of the muscle they'd lose if 38-year-old Brooks Orpik retires or signs elsewhere. Gudas has been suspended four times — three games for an illegal check to the head in 2015, six games for interference in 2016, 10 games for slashing in 2017 and two games for high-sticking in 2019.

Niskanen was a key piece of the Capitals' 2018 Stanley Cup run. He struggled for about half of this past season and finished with 25 points on eight goals and 17 assists.

"I would say the first 50 games overall not as good as I have played in the past," Niskanen said on locker cleanout day. "Certainly better later than early in the year. I think I played closer to my usual level the later the season went on. That was when I was most competitive and best execution and all that good stuff. I was my best later in the year, closer to playoffs and in the playoffs."

The 32-year-old has two years left on his contract at an annual cap hit of $5.75 million. The Capitals made the playoffs in all five seasons since Niskanen signed with them.

"Matt is a consummate professional and was a big part of our success," MacLellan said. "We wish him and his family all the best moving forward."

Trading Niskanen is the latest part of MacLellan's defensive makeover after he acquired Nick Jensen from Detroit for Madison Bowey in February. The cap-crunched Capitals need to sign one restricted free agent winger, Jakub Vrana, to a new deal, have a decision to make on Andre Burakovsky, another, and have holes to fill with wingers Carl Hagelin, Brett Connolly and Devante Smith-Pelly set to become unrestricted free agents.

It's the first significant move of the NHL off-season after the St. Louis Blues won the Stanley Cup and succeeded the Capitals as reigning champions.

A year removed from winning the Cup, Niskanen was "not totally shocked" but caught a bit off-guard by the trade. He knew all about Washington's cap constraints and that moves happen this time of year and now is turning his attention to being a positive influence on Philadelphia's young defencemen.

"They have two or three young studs that are offensively talented, gifted, they have good instincts, can move the puck well, assist in the offence," Niskanen said on a conference call. "I envision myself being a really good partner for one of these young studs and try to give them confidence to do the things that they do well and I'll be right beside them."