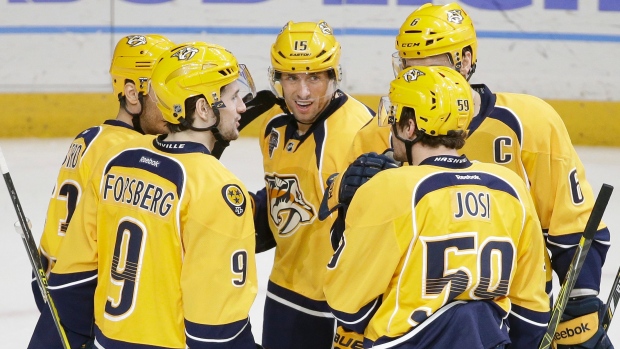 Shea Weber and James Neal each had a goal and an assist to lead the Predators to a 5-1 victory over the Jackets on Saturday night.

Nashville is 32-5-4 at home against Columbus.

Mattias Ekholm, Craig Smith and Calle Jarnkrok also scored for the Predators, who have won five of six. Roman Josi had three assists and has 44 this season, setting a franchise record for a defenceman. Pekka Rinne made 18 saves.

Boone Jenner had the lone goal for the Jackets, who have lost three of four.

"Totally overwhelmed, totally overwhelmed," Columbus coach John Tortorella said. "That's all you need to know. I am not going to answer or dissect or talk about the game. It won't do anybody any good for me to go any further than we were overwhelmed from the start of the game to the end."

Neal scored the game's first goal at 3:04 of the opening period.

From the right faceoff dot, Neal used Columbus defenceman David Savard as a screen and fired a wrist shot that beat goaltender Joonas Korpisalo on the far side.

Korpisalo stopped 43 of the 48 shots.

The goal was Neal's 30th of the season, and earlier in the week, Filip Forsberg scored his 30th. This is just the second time the Predators have had a pair of 30-goal scorers. In 2005-06, both Steve Sullivan and Paul Kariya scored 31 goals.

From the left circle, Jenner sent a cross-ice pass to Brandon Saad, whose shot attempt from the right circle was stopped by Rinne. The rebound fell in the crease, and Jenner was there to poke it home. Jenner has goals in three straight.

"They came out hard right away," Jenner said. "They got their first one. I thought we started to play a little bit better and got one back. It wasn't a good first period for us."

Nashville regained the lead at 17:33 of the first when Ekholm redirected in a slap pass from Ryan Ellis for his career-high eighth goal of the season.

"I know he's a very skilled guy, he does those plays," Ekholm said of Ellis. "I was vocal and I was tapping my stick because I was wide open in the slot. He made a great play. That's just the way he plays the game. That's how he sees the ice. That was a heck of a play."

Nashville had 27 shots on goal in the first period, a franchise record for shots in a period.

"We got through the neutral zone very well and got in their end and the forwards did a great job forechecking for some turnovers," Josi said.

In the second, Savard blocked Weber's shot and the rebound came to Smith in the slot, where he fired the puck past Korpisalo for his 19th of the season at 6:11.

"When it's 2-1 and you've had some shots and some looks and some quality chances and you are up by one, even getting the third one was a big one," Nashville coach Peter Laviolette said. "So it was nice to see it unfold for us anyway from that point."

Jarnkrok made it 5-1 at 23 seconds of the third with a redirection of Josi's pass from the left point.

Nashville can clinch a second straight playoff appearance with a regulation victory over the visiting Colorado Avalanche on Monday night.

NOTES: Saad has assists in three consecutive games. ... This is the second time in Neal's career that he has scored 30 goals, with the first being in 2011-12 with Pittsburgh. He finished that season with 40. ... Prior to the game, the Predators announced that they would be speaking in the coming days with Harvard senior Jimmy Vesey, who Nashville drafted in the 3rd round in 2012. Vesey's collegiate career ended Friday night in the Crimson's loss to Boston College in the NCAA Tournament.