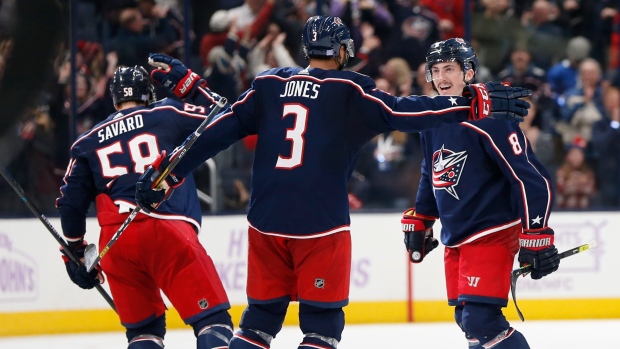 COLUMBUS, Ohio — Columbus Blue Jackets coach John Tortorella hopes an overtime victory over the defending Stanley Cup champions will loosen up his team, which he says has been a bundle of nerves lately.

“I hope a win will relax this hockey club,” Tortorella said shortly after Zach Werenski scored in overtime to help the Blue Jackets beat the St. Louis Blues 3-2 Friday night.

“We are one uptight .... team,” he said. “Hopefully it will help them. It’s a good win. As ugly as we were in the first two periods, we were that good in the third period. And we find a way.”

Columbus had killed a 4-on-3 Blues power play in the extra period and then got the man advantage. Werenski buried a one-timer from the right circle off a Seth Jones pass at the 3:34 mark to win it.

Pierre-Luc Dubois scored for Columbus early in the third period to tie it 2-all, set up by a pass from below the goal line by Emil Bemstrom.

“We found a way to win,” said Werenski, who has goals in three straight games. “I think we’ve been in this situation quite a bit with overtime games and we found ways to lose, so tonight it was a job to find a way to win.”

Vladislav Gavrikov got his first NHL goal and Joonas Korpisalo made 25 saves for the Blue Jackets, who stopped a two-game slide.

Mackenzie McEachern and Brayden Schenn scored for the Blues, who lost a second consecutive game in overtime. Jake Allen, starting ahead of Jordan Binnington on the first night of a back-to-back, had 36 saves.

Gavrikov scored on a tap-in off the stick of a Blues player 9:34 in. With 43 seconds left in the first period, McEachern squeezed in a wraparound between Korpisalo’s pad and the post to tie it.

Six seconds into a power play in the second period, Schenn got his team-leading 11th goal with a wide-open shot over Korpisalo’s glove. Dubois then tied it in the third.

“We need to step on the throat a little bit more, if you want to use that term, and find ways to slow the teams down,” Blues coach Craig Berube said. “It’s not necessarily scoring goals but killing the momentum down to our pace and dictating what we want to do on the ice.

The Blues have played 10 overtimes, tying them for second-most in NHL history through 20 games of a season.

“We’ve got to do a better job of not letting the game go to overtime,” Schenn said. “We’ve had the lead in multiple games here. Whether we’re sitting back or not taking care of the puck or just too relaxed going into the third period. It’s biting us right now, and we have to clean that up.”

The Blue Jackets got their 30th regular-season overtime win since 2016-17, tying them with the Los Angeles Kings for the most in that span.

At this point, with the Blue Jackets languishing near the bottom of the Metropolitan Division, Tortorella couldn’t care less about esthetics.

“Hopefully, that will release something in us,” he said.

NOTES: Columbus D Scott Harrington replaced Ryan Murray, who was injured against Montreal on Tuesday. ... The Blue Jackets put forward Kole Sherwood on injured reserve and brought up forward Markus Hannikainen from Cleveland of the AHL. ... David Perron, who assisted on Schenn’s goal, has 11 points in the past nine games. ... Dubois has eight points in his last 11 games.