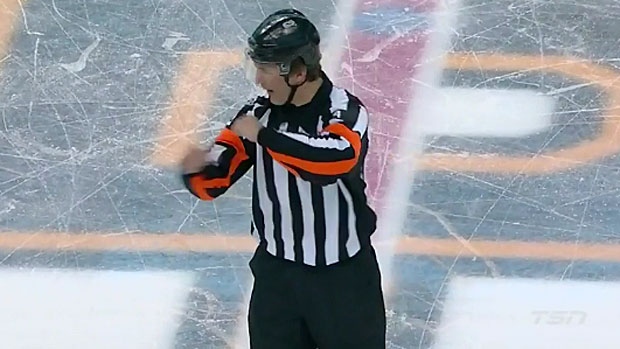 The reaction to the 45-year-old NHL referee's emphatic in-house P.A. call of fighting majors for Montreal's Andrew Shaw and Boston's Torey Krug last night has pretty much gone viral, and understandably so.

If you haven't seen or heard it, here it is.

Let's face it, for as "good" as today's game of hockey has become, it does on far too many nights lack a certain (large?) amount of passion and/or personality. If it takes a referee to provide some, so be it.

I was curious the morning after if the NHL would share everyone else's enthusiasm with McCauley's emotional call, complete with his "put up your dukes" gesture. I mean, the days of NHL on-ice officials showing a lot of flair or personality or individualism appear to be long gone. No one is suggesting the guys in stripes should become the show, but there's no reason they can't genuinely contribute to it either.

So it was gratifying to hear NHL director of officiating Stephen Walkom say he had no issue with it, since McCauley's call was an accurate and true reflection of who he is and how he officiates a game. He has a passion and a feel for it; that's who Wes McCauley is.

More importantly, at least in terms of the "put up your dukes" fight signal, McCauley was actually following a directive from his superior.

"I loved that part because I used to do that and I've been telling the guys if they're signalling a fight, use it," Walkom said. "The funny thing is there has never been an actual signal for fighting in the NHL. We have always had an official signal for every other infraction but we have never had one for fighting.

"So when I refereed, I made it up, I just called it that way. Put up your dukes, eh? It's the universal symbol for fighting. I thought, why not? I told the guys in our [preseason] training camp to use it if they want, so Wes did a good job with that."

The emphatic "FIGHTING!" announcement was his own touch, not unlike his "WE GOT A GOAL!" call that also went viral after last March's San Jose-Los Angeles game.

For those of us old enough to remember, it just reinforces that McCauley is merely a chip off the old block.

Wes, of course, is the son for former NHL referee John McCauley, who was an on-ice official for 15 years before retiring in 1981 because of complications from an eye injury sustained in 1979 when he was punched by a disgruntled fan. John went on to work for the league in an off-ice capacity and was NHL director of officiating from 1986 until his tragic and sudden death in 1989.

John was one of the all-time good-guy greats, both on and off the ice. He more or less epitomized the game he called and supervised for so many years. John was something of a charming rogue in a game full of them back then. He always knew his place in it but managed to add something but never detract from it.

It was good to see Wes McCauley do his thing on Sunday night and to know the apple didn't fall from the tree.