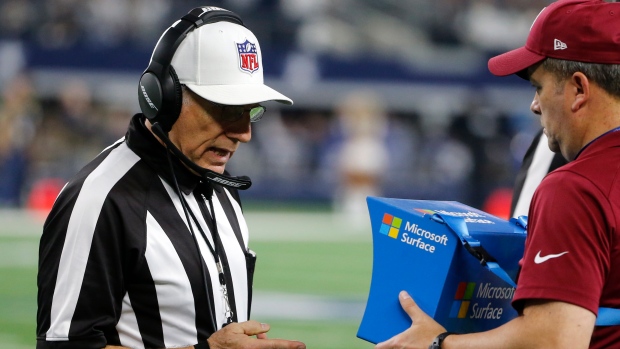 Officials and coaches worried about their health and safety amid the COVID-19 pandemic will soon have a revamped tool of their trade available for use in their return to play protocols: the 'whistle mask.'

Hamilton-based companies Fox 40 International and Niko Apparel Systems have teamed up to produce 'whistle masks'' to allow officials and coaches working in various minor and professional sports leagues as well as schools to feel more safe on the ice, field or court when play is resumed in the coming weeks and months.

Knowing that “masks were quickly becoming the norm” during the pandemic, Fox 40 president/COO Dave Foxcroft said his company “connected” with Joe Camillo from Niko Apparel Systems "as his company had already retooled from making uniforms into cutting and sewing masks. Working closely with Joe and his design team we developed the now patentable 'Fox 40 Whistle Mask' and the 'Fox 40 Protective Whistle pouch.'

Foxcroft said after he received “several requests” from officiating and coaching customers who wanted to continue to use their standard “mouth-blown” whistles, Fox 40 and Niko Apparel Systems stepped up in response to the obvious challenges of officiating or coaching with so many health and safety protocols in place.

"The whistle mask allows the user to attach their existing 'Fox 40' whistle to the mask via a plastic clip, and after the game they can remove the whistle and wash the mask," he said. Whistles can be sanitized using the company's spray sanitizer, which is produced by Oakville, Ont.-based Maverick Distilleries.

"From a functional standpoint you can blow the whistle, release the whistle, talk, signal, and put the whistle back into your mouth, all safely without discharging droplets or touching the whistle or face," said Foxcroft.

With various return to play formats on tap this summer, much of the focus has been placed on athletes, coaches and team executives charged with bringing back the 'normal' cycle of sport.

Officials, on the other hand, many with their own families, pre-existing health conditions and quality-of-life concerns, have been caught on the outside looking in during league and player discussions about NHL hub city locations, the NBA bubble in Orlando or the possible resumption of professional and collegiate football this fall during the pandemic.

Foxcroft told TSN that officials are not exempt from the uphill battle to begin play.

He said his company is in "constant contact with national coordinators for both referees and coaches" through their affiliations with the U.S-based National Association of Sports Officials and various coaching associations in Canada and the United States "discussing how to keep officials, coaches and players safe" in their return to play scenarios.

Foxcroft said Fox 40 International, a longtime partner and supplier of whistles, mouth guards and other accessories to major sporting organizations in North America and around the world, has also developed electronic whistles powered by rechargeable batteries that are catching the eye of many sports leagues. Electronic whistles are water-resistant and do not release droplets of water into the air - a major concern of health officials during the pandemic - which is the case for traditional mouth-blown whistles.

Former NFL referee turned league senior vice-resident Walt Anderson has agreed to purchase "a large number" of the company's electronic whistles for the NFL’s return, while Anthony Holman, the NCAA’s managing director of championships and alliances, operations and playing rules and officiating, has bought 10,000 whistle masks for use in 2020-21.

Foxcroft said the NHL has ordered his company's pealess fingergrip whistle, the 'Fox 40 CAUL,' named after the late John McCauley, the league's former director of NHL officials and a longtime referee, to help prevent hand-to-face contact when using the whistle.

The NBA and WNBA, meanwhile, will be receiving the company's whistle pouches for testing this week.

Closer to home, the Canadian Football League has been in contact with Fox 40 International regarding safe whistle options if the league returns to play later this summer or in early fall. Samples of both the electronic whistle and whistle mask will be sent to the league's football operations department later this week.