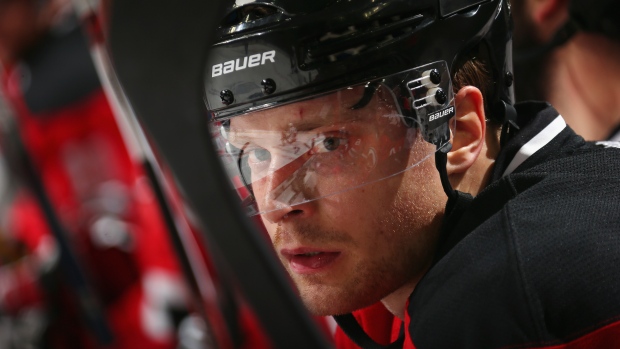 Last Wednesday, the hockey world was exposed to two of the biggest one-for-one trades in the salary cap era.

Though I think the biggest winner on the day was Nashville in their ability to acquire all-world defender P.K. Subban, I do recognize that there were other factors at play with the deal. Montreal has been very guarded about the how and why behind the Subban trade, but it’s more than reasonable to assume that there was something well beyond on-ice performance that drove that transaction. There’s also the realization that Nashville was very incentivized to pull the trigger on the proposal – not only were they getting one of the better players in the universe, but they were getting out from a truly poisonous contract.

That’s why the Edmonton and New Jersey swap is a bit more interesting. This was a bona fide hockey trade – a team moving a talented winger at an extremely high cost to obtain a young defender. Oilers GM Peter Chiarelli described the high cost associated with the trade as the market cost for acquiring a first-pairing defenceman. There were, undoubtedly, additional pressures in the sense that Edmonton felt the need to shake up the roster to some degree. A repeat of last season, I’m sure, would be considered unacceptable by the decision makers there.

The problem with this trade is that I’m not sure Adam Larsson is the player that Edmonton thinks he is, and the Oilers are thus assuming significant risk in this deal. The piece moving from the organization is one of the best scorers in the game, a top-10 5-on-5 point producer on a team that’s struggled mightily to do much of anything in recent years.

In return, the Oilers have acquired a steady, defensively talented blueliner who has all of nine goals in 274 games played. Larsson can certainly play, but is a seemingly one-dimensional player worth the cost of a Taylor Hall?

I’ll be the first to remind all that goals (and points) aren’t the best indicator of production for defencemen. The more concerning part here is that from a shot analysis, the Devils were generally better with Larsson on the bench than not (about +2.5 per 60 minutes). That’s something we rarely see from first-pairing defenders. You can go through the list if you don’t believe me – the names higher on the list tend to be Norris Trophy contenders every season, while the names lower on the list seem more ripe for a buyout.

There’s an important caveat here, and that’s the fact that Larsson was brutally deployed by the Devils coaching staff over the last few years. There were many games where just about every single defensive zone start saw Adam Larsson and his partner sent over the boards to stop the bleeding and try and flip the run of play. That, understandably, has been a counterpoint made by observers regarding his average-to-middling shot differentials over the years.

If the theory is that Larsson’s been in a really tough developmental spot because of his brutal deployment, it stands to reason that a more friendly two-way approach for Todd McLellan might do wonders for both Larsson and his team. We would theorize the following would occur with more favourable zone starts: (a) more favourable shot differentials; (b) more offensive opportunities created; and (c) more favourable on-ice goal-scoring rates.

The cool thing is we can take a stab at whether or not this theory holds water. After all, Larsson wasn’t buried in every game for New Jersey – there were plenty of instances in which he saw decent or favourable offensive zone starts, and in those games, we can analyze how New Jersey performed with his role having changed. 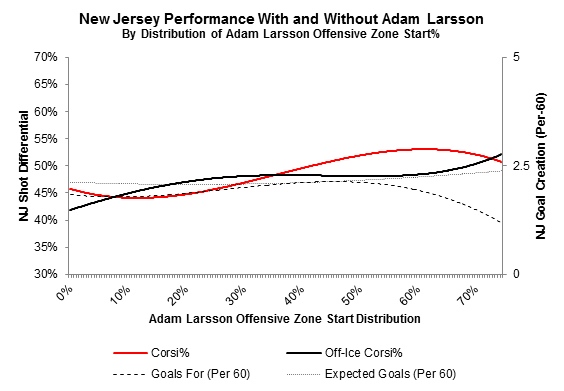 So, the good news is that Larsson’s negative impact on shot differentials seems to dissipate some with more favourable offensive zone starts. Larsson’s career norms are right around the 25-45 per cent rate, which is why you see his numbers historically in the red. But when he’s really getting a lot of offensive zone looks relative to teammates, his team-relative shot differential improves to a small degree.

The troubling piece of it is that the tough zone start issue doesn’t seem to explain his poor impact on team goal-scoring rates. You can see that as his offensive zone start% climbs, the team’s goal differentials – both actual and expected – either stagnate or decline. That’s the discouraging piece of this.

Where are we left? Well, I think it’s reasonable to note that Larsson’s not a team drag on shot differential. I also think it’s reasonable to point out that he’s been thrust into that role because there are no significant returns when he sees more favourable minutes. Maybe his true talent is in shot and scoring chance suppression. Maybe his offensive game – and the offensive game of his teammates when he is out there – is just not going to materialize as we initially thought. Maybe New Jersey found an optimized role for Larsson because of all of this, and maybe Edmonton should carry over his deployment to an Oilers group that definitively needs help on the goal prevention front.

Larsson can definitely play, and I think he’s going to provide real tangible benefits to an Oilers team sorely in need of blueline help. But, the other side of the coin is that he seems to be a somewhat one-dimensional defender. That one dimension is great, but is it worth the premium of an elite scorer like Hall?

I certainly don’t think so.