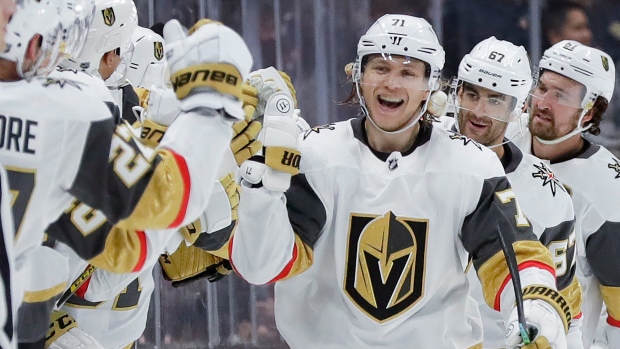 ANAHEIM, Calif. — William Karlsson and the Vegas Golden Knights have the NHL's longest current winning streak, and they've built it in all sorts of ways.

Blowing a two-goal lead in the third period wasn't what they had in mind. No matter — no slowing Vegas on this roll.

Karlsson got his third career hat trick, Shea Theodore scored in overtime and the Golden Knights extended their winning streak to a season-high six games with a 6-5 victory over the Anaheim Ducks.

Theodore's winner 3:50 into OT came after the Golden Knights squandered a two-goal lead late in the third period. Mark Stone assisted on the goal to complete his second four-assist game during the winning streak.

Stone started the rush by intercepting Ryan Getzlaf's pass. He passed it to Theodore, who skated up the right side of the ice before releasing a wrist shot from the right faceoff circle to beat goaltender John Gibson.

“I think we’ve just played good hockey. We’ve really tightened up our systems,” said Theodore, who has nine goals this season. “I think we are sticking to that and really starting to feel that pressure of the end of the season.”

Karlsson hadn't scored a goal in his last 20 games coming into Sunday but broke out of that in a big way. His snap shot 19:03 into the second period while Gibson was screened was his first goal since Dec. 13.

Nick Ritchie scored twice, including a tying goal 21 seconds into the third period before Karlsson put Vegas ahead 4-3 6:28 into the third with a shot from the faceoff circle. Karlsson completed his hat trick at 11:05 with a backhand past Gibson's glove after getting a pass from Reilly Smith in front of the net.

“Yeah, not bad. It feels like it’s been forever,” Karlsson said. “I'm very happy for those three goals and the two points.”

Vegas' 5-3 lead appeared safe until Adam Henrique forced overtime with goals 1:42 apart. Both came when the Ducks brought on the extra skater.

Henrique brought the Ducks within a goal with 2:57 remaining when he knocked in a rebound after Nick Ritchie was stopped by Vegas' Malcolm Subban, then sent it to overtime with 1:15 remaining when the Ducks crashed the net.

“It was a fun one to be a part of. We haven’t had many of those this year,” Ritchie said. “We’re not really a team that plays a shootout style, but it turned into that.”

Alec Martinez — who was acquired from Los Angeles on Tuesday — had a goal and an assist for Vegas, and Max Pacioretty added two assists.

Patrick Brown also scored and Subban made 25 saves for the Golden Knights, who have vaulted from third place to leading the Pacific Division during their winning streak.

Ritchie and Henrique each had their first four-point games (two goals, two assists) for Anaheim, which has dropped five of its last six. Devin Shore also scored, and Gibson stopped 22 shots.

Brown opened the scoring when knocked in a rebound at 12:49 of the first period after Ryan Reaves circled the net and dumped it into the crease. Gibson stopped Gage Quinney's attempt with his right blocker before Brown put it in for his first goal of the season and second of his career. Brown was called up on Sunday after Nicolas Roy was injured during Saturday's win over Florida.

The Ducks evened it with 1.3 seconds remaining in the first when Shore was in the high slot and redirected Brendan Guhle's slap shot. Half of Shore's four goals this season have come against Vegas.

Ritchie gave the Ducks the lead midway through the second when he took advantage of a turnover near the Knights' net and knocked in a wrist shot after Nick Holden was unable to clear it. Martinez tied it at 2 five minutes later with a one-timer during an odd-man rush for his second goal since being traded by Los Angeles to the Golden Knights on Tuesday.

NOTES: All of Karlsson's hat tricks have come with Vegas. The other two occurred during the 2017-18 season. ... Quinney's assist was his first NHL point. ... Smith has a point in five straight games (four goals, two assists) and Pacioretty has extended his streak to four (three goals, three assists). ... Anaheim C Derek Grant, who could be dealt before Monday's trade deadline, was a healthy scratch. ... Henrique has 10 points (six goals, four assists) in his last eight games.

Golden Knights: Begin a four-game homestand against the Edmonton Oilers on Wednesday.