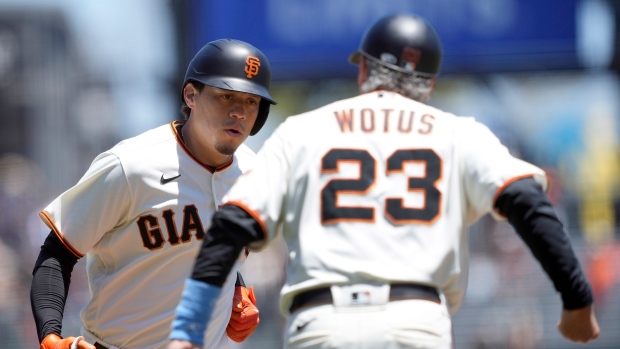 Brandon Crawford hit his 16th homer and Mike Yastrzemski combined with Flores for consecutive homers in the first off Zach Eflin (2-6). San Francisco has 107 home runs, tied with Toronto for the major league lead.

“Today I think I got a little help from the wind,” Flores said. “Honestly, our team is not looking to hit homers all the time, but that comes with good swings and good pitches that we’re swinging at.”

Sammy Long (1-0), a 25-year-old left-hander who debuted June 9, won his first major league start. Long allowed two runs and four hits in six innings with six strikeouts and one walk. He retired 10 of his final 11 batters, relying heavily on a curveball that was effective most of the afternoon.

“I didn’t have to think about it much, it was just landing for strikes,” Long said. “I know when I have that pitch I’m going to be able to get into some leverage counts easier. As the game went on (catcher Curt Casali) called it more and I trusted him.”

J.T. Realmuto homered and had three of the Phillies’ four hits. Philadelphia has lost four of six.

Eflin allowed seven runs — six earned — and nine hits in five innings. He is 0-5 in his last seven starts.

Yastrzemski hit a two-run homer in the first inning for the second straight day, Flores homered in the first and fifth to raise his season total to six, then was replaced by a pinch runner after singling in the seventh.

We expect these kind of performances from Flo,” manager Gabe Kapler said. “It’s not that we expect two home runs but we expect high quality at-bats, we expect him to be an incredibly tough out. It’s who he was last year for us last year. It’s who he’s been in his career. He’s excellent in the biggest moments.”

Crawford hit a two-run homer in the third and is five shy of his career-high of 21 set in 2015. Crawford added a two-run double in the ninth and needs four RBIs to move past JT Snow for ninth in San Francisco history.

The two-time All-Star shortstop also made a defensive gem with a barehanded grab and throw on Luke Williams infield grounder in the third.

Realmuto doubled in the first, hit his seventh home run in the third and singled in the sixth.

HEATING UP AT HOME

The Giants completed a 6-1 homestand highlighted by plenty of offense. San Francisco scored five or more runs in all seven games, hit .333 (82 for 246) as a team with 19 doubles, five triples and 16 home runs.

“In the history of our park it hasn’t been a place where we’ve come to get hot,” Crawford said. “Some of it just has to do with the ups and downs of a baseball season. The last road trip we didn’t hit great collectively but it’s a game of adjustments.”

BREBBIA BACK IN THE BIGS

Just over a year after Tommy John surgery, Giants right-hander John Brebbia made a successful return to the majors and pitched a perfect ninth inning, punching the air after striking out Rafael Marchan to end the game. Brebbia, activated from the 60-day injured list before the game, underwent surgery on June 1, 2020, while with St. Louis. He signed with San Francisco six months later.

Phillies: Philadelphia opens a two-game homestand against Washington on Tuesday, when RHP Zack Wheeler (5-3, 2.15 ERA) faces the Nationals for the third time this season.

Giants: RHP Anthony DeSclafani (7-2, 3.01 ERA) takes a three-game winning streak into Tuesday’s start against the Angels in Los Angeles. During the streak DeSclafani has 17 strikeouts and two walks in 20 innings.