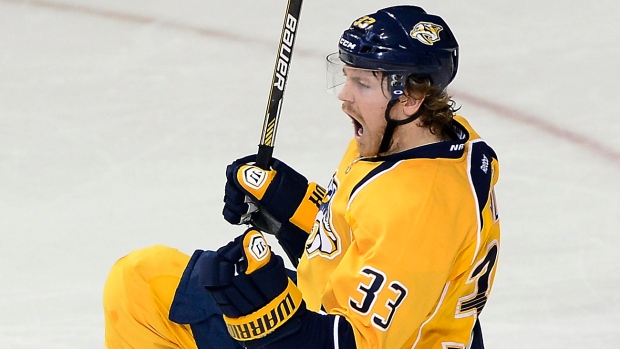 NASHVILLE, Tenn. - Just when it seemed like the Nashville Predators might let one slip away, Colin Wilson and Craig Smith struck twice during a 66-second span.

Wilson scored the tiebreaking goal on a tic-tac-toe play with 3:27 left, leading Nashville to a 3-1 victory over the New Jersey Devils on Saturday night for the Predators' fifth straight win.

Craig Smith added an insurance goal when he swatted a shot between Cory Schneider's legs with 2:21 remaining.

"Under pressure we were calm and had the puck, and able to make plays," Smith said. "We've been in a position a few times this year where we're down late or up late, and we're able to hold lead."

Matt Cullen gave Nashville a 1-0 lead in the first period before Steve Bernier's power-play goal late in the second period tied it up for New Jersey.

Predators coach Peter Laviolette changed his lines to give Nashville more aggressiveness in the offensive zone.

"This morning we talked about it," Rinne said. "I feel like that's a luxury we have, being able to mix it us a little bit with different combinations. I thought that some of the lines looked really good. Right away, they seemed to have some chemistry."

New Jersey goalie Cory Schneider made 35 saves to keep the Devils in the game despite being outshot 21-3 in the first period.

"Rinne is one of the best in the game and there's a reason why he's in the running for the Vezina or the MVP right now," Schneider said. "He made it look easy. Close, but not quite enough."

The Devils lost their fourth straight.

"Well, I'll tell you we weathered through the storm at the beginning of the first period," New Jersey general manager-interim coach Lou Lamoriello said. "They came at us. We knew they would and Cory gave us a chance."

Cullen skated from behind the net to the front of the crease where he fired a wrist shot that beat Schneider low to his stick side to give Nashville a 1-0 lead at 8:49 of the first period. It was Cullen's fifth goal of the season.

New Jersey had a chance to tie it during a second-period power play, but Rinne slid across the crease to make a left leg pad save on Mike Cammalleri's shot from the bottom of the faceoff circle.

The Devils enjoyed better luck on their next power play when Bernier backhanded a rebound past Rinne stickside to tie the score with 2:23 left in the second period. Eric Gelinas' slap shot bounced off the end board to Bernier in front of the crease, where he poked it home for his 10th goal of the season.

Nashville improved to 15-5-1 against Eastern Conference opponents, including 11-1-0 at home.

"To be honest, I liked our third period — how we got back to work and really started to push forward," Laviolette said.

New Jersey remains 12 points out of the Eastern Conference's final playoff spot. The Devils have missed the playoffs three of the past four years.

NOTES: Devils RW Jaromir Jagr, 42, played in his 1,525th career game, which ranks 13th in NHL history — one ahead of Hall of Famer Brendan Shanahan. ... Nashville D Mattias Ekholm, who suffered an upper-body injury in last Sunday's shootout win at Florida, returned to the lineup. ... New Jersey RW Jordin Tootoo's book, "All The Way: My Life On Ice," is listed No. 1 in Amazon's bestsellers for hockey biographies. It was released in October. Tootoo, a fan favourite during his time in Nashville, played his first eight NHL seasons with the Predators. ... Predators D Ryan Ellis skated with the team for the first time since suffering a lower-body injury in an overtime win over Dallas on Jan. 8.