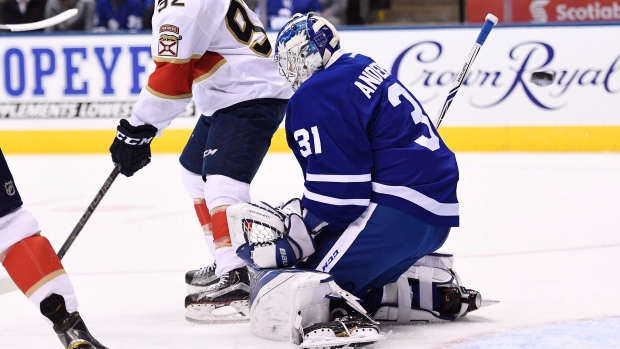 There was the blowout loss at home on Tuesday against Tampa. Then in the second period of Thursday's game against the Florida Panthers he was tripped awkwardly in his crease by Jaromir Jagr, which fortunately didn't do any damage. What did was the high-stick Andersen subsequently took from Colton Sceviour through his mask that split open his left eyebrow, after he had backstopped the Maple Leafs to a lead late in the third period.

The bloodied netminder stayed in though. He stopped 29 of 31 shots to give Toronto its second win of the year, downing the Panthers 3-2. The Leafs move to 2-2-3 on the season.

“It’s a little different experience. I’m sure that probably won’t happen the same way again,” Andersen said of his eventful night. “I’m glad the eye is okay [because] you never want to leave the game. I was just happy we could patch it up so it wouldn’t bleed too much and keep me out there.”

The last 72 hours have been a near-constant stream of debate, criticism and questions about Andersen and his league-low stats after five starts. Before Thursday’s game, many of the Maple Leafs defended their goaltender and lamented the quality of chances they have allowed up front that have hindered his success. Head coach Mike Babcock thought his team did even more of that against Florida.

“He was our best player by far, and that’s as many good chances as we’ve given up all year probably,” Babcock said. “And we turned the puck over as much as we have, period. But the goalie was good and that goes to show you how important goaltending is. I’m real happy for Freddie. Coming here, you’ve got to find yourself. I’m happy for him, and happy for the team.”

The night didn’t start well for anyone on the Maple Leafs, when an early turnover in the neutral zone led to a two-on-one resulting in Jonathan Marchessault’s first goal of the game. There was little Andersen could do to stop the play, initiated by a Jagr feed. But the second goal (also by Marchessault) that gave Florida a 2-1 lead on the power play was an easy top-shelf snipe Andersen would have liked to have back. All in all though, his method for turning the tide on his early season woes worked pretty well.

While Toronto still has work to do at minimizing opportunities around the net, Andersen’s teammates were eager to see their goalie get rewarded for all the good he’s done so far, and glad to get the job done.

“[Andersen] held us in at the start - we didn’t play very well and those goals he gave up were great goals by them,” Bozak said. “Which it has been for the majority of the games now. So it was nice to be able to hold on at the end.”