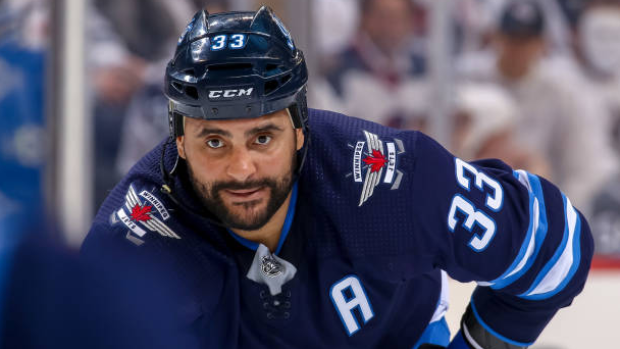 According to TSN Hockey Insider Bob McKenzie, Winnipeg Jets defenceman Dustin Byfuglien is believed to be pondering his NHL future as he takes a leave of absence from the club.

McKenzie notes Byfuglien is weighing his options at the moment and remains without a timetable for a decision. Neither the Jets defenceman or his agent, Ben Hankinson, responded to a request for comment from McKenzie.

TSN Hockey Insider Darren Dreger adds the Jets are expected to give Byfuglien as much space and time as he needs during the process.

No time table for a decision is an important factor in this story. I’m certain the Jets will give Byfuglien as much time and space as he needs to contemplate his future both on and off the ice. He’s such a big part of the organization. https://t.co/MdX0K7h6qr

"Let's just put it this way — there’s nothing sinister to this," Jets coach Paul Maurice said of Byfuglien's leave last week. "You start going down the list and then the process of elimination ... he has his right to privacy in this. Like I said, there's nothing sinister to it. He needs some time and he was given that."

The 34-year-old had four goals and 27 assists in 42 games last season. He missed significant time after suffering a lower-body injury in December and appeared in just 10 games games after Dec. 29.  Byfuglien returned ahead of the postseason and recorded two goals and eight points in six playoff games.

He is signed through next season at a cap hit of $7.6 million. TSN Senior Hockey Reporter Frank Seravalli noted Wednesday that Byfuglien will continue to count against the cap with he is listed as "active non-roster" on personal leave to start the season, but he will not take up a spot on the 23-man roster. The Jets could also opt to suspend the defenceman and request his salary does not count against their cap while he is away from the team. Should Byfuglien opt for retirement, his salary would no longer count against the cap and Jets would not have to pay him the remaining $14 million he is owed over the next two years.

Or, of course, if Byfuglien decides to officially retire, his contract would be wiped from books. #nhljets would not have any cap implications and Byfuglien would walk away from the $14 million owed to him over the next 2 season. Also: no signing bonus to claw back. [4/4]

The Jets blueline underwent significant changes this off-season, with Jacob Trouba, Tyler Myers and Ben Chiarot all finding new homes. TSN Hockey Insider Pierre LeBrun wondered Wednesday whether the Jets will look into adding a defenceman, depending on Byfuglien's decision. LeBrun reports that Rasmus Ristolainen of the Buffalo Sabres and Justin Faulk of the Carolina Hurricanes are top-four right-shot defencemen that are believed to be available on the trade market. He adds that the Jets are believed to be on Faulk's approved trade list.

Faulk and Ristolainen are top 4 RHD that are available for trade and i wonder if the Jets don’t inquire at some point depending on what happens with Byfuglien. I believe Winnipeg is on Faulk’s approved list of teams as part of his modified NTC. So waiving not required. https://t.co/4aO3e2j215

Winnipeg will open their season on Oct. 3 against the New York Rangers.