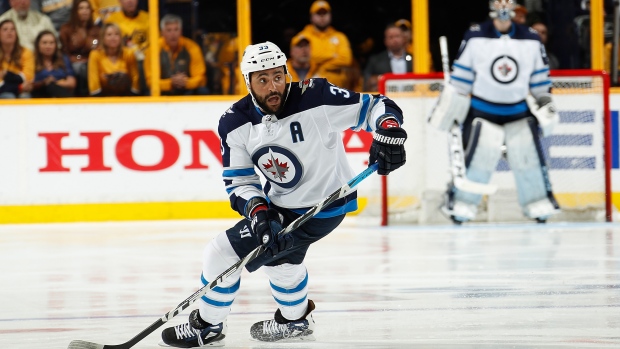 WINNIPEG — Dustin Byfuglien's name was a surprise addition to the list of key Winnipeg Jets players absent from the first day of training camp Friday.

As expected, restricted free-agent forwards Patrik Laine and Kyle Connor didn't show up for fitness testing as they're seeking new contracts, but the NHL club also announced Byfuglien was granted a leave of absence.

"I met with Buff (Thursday) and we had some conversations, and in the conversations he indicated that he needed some personal time," Jets general manager Kevin Cheveldayoff said.

"We certainly granted it. Dustin is a big part of our family here. There's always an open policy for discussions. We always care about people of our family. One thing I will say, health-wise everything is good for him and his family. But again, from our standpoint, we support Dustin and look forward to the resolution."

There is no timeline for the veteran defenceman's return and the club declined to reveal the reason for the leave.

"Let's just put it this way — there's nothing sinister to this," Jets coach Paul Maurice said. "You start going down the list and then the process of elimination ... he has his right to privacy in this."

Cheveldayoff said Byfuglien was in Winnipeg skating before the start of camp and remains in the city.

When asked if there was reason to be concerned for Byfuglien, Maurice said, "No. I think it's going to be well-handled."

"He's been an unreplaceable element to our team," Jets captain Blake Wheeler said of Byfuglien, who's an alternate captain. "Obviously, what he brings on the ice is pretty recognizable. He's a really unique guy in the room for us, doesn't have many bad days, keeps it pretty light."

The Jets already were thinner at the back after losing defencemen Jacob Trouba, Ben Chiarot and Tyler Myers during the off-season. Chiarot (Montreal Canadiens) and Myers (Vancouver Canucks) left through free agency, while Trouba was traded to the New York Rangers in June for young defenceman Neal Pionk and the 20th overall pick in the draft, which turned out to be Finnish defenceman Ville Heinola.

Wheeler said he wasn't surprised Laine and Connor weren't at camp because other players across the league are in the same situation.

"Clearly, we're a better hockey team with those guys in our lineup and, once again, as friends of theirs and teammate, you support them and you want them to capitalize on their value and come into camp excited about being here," Wheeler said.

"But the rest of it is out of our control and, to a large degree, is out of their control. It's going to get dealt with and figured out and when it does, we're going to give them a big, old hug and get them in the group and get them up to speed."

Laine and Connor each played 82 games last season, both spending time on the top line with Wheeler and centre Mark Scheifele.

Maurice confirmed he visited Laine in Finland during the summer, but emphasized he's done that with other players and it had nothing to do with the sharp-shooter's contract.

"Oh, I stay the hell away from that stuff," Maurice said. "Never, ever have I ever talked money with a player or contract status.

"Any time that I meet with a guy or talk to a guy on the phone that's in that situation, that's the first line out of my mouth. I stay out of that because I have no control over it."

There has been speculation about whether Laine wanted to remain in Winnipeg, but that wasn't a subject of conversation between the coach and Laine.

"It never came up," Maurice said. "We talked hockey and then we talked life and got to know him a little bit better and what he does away from the rink, what he has fun with. It never, ever came up that he didn't enjoy being in Winnipeg or playing here."

Last season, the Jets exited the playoffs after a first-round loss to St. Louis, which went on to capture the Stanley Cup. The season before, Winnipeg lost in the Western Conference final against the Vegas Golden Knights.

Note to readers: This is a corrected story. A previous version said the Vegas Golden Knights were Cup winners in 2018