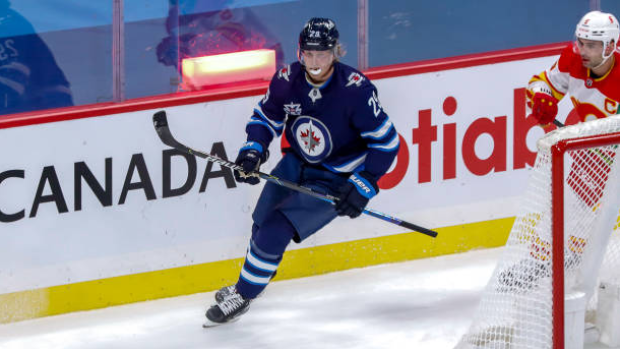 Winnipeg Jets winger Patrik Laine had a productive opening game of the season, scoring the overtime winner as part of a three-point night in Thursday's 4-3 win over the Calgary Flames.

Laine, however, was not happy to wind up with only a minor penalty for roughing after dropping the gloves with Matthew Tkachuk as part of a skirmish late in the second period.

“I was pissed off because that would have been a Gordie Howe hat trick,” Laine said after the win. “That one time when I drop my gloves, I get a two-minute penalty. So that’s kind of embarrassing.”

Laine went after Noah Hanifin after the Flames defenceman cross-checked Jets forward Kyle Connor behind the Calgary net, with Tkachuk jumping in soon after.

Hanifin received a minor penalty for cross-checking on the play, while Laine and Tkachuk both picked up roughing minors. Laine has never been assessed a fighting major.

“It gets the team fired up,” Jets forward Nik Ehlers said of Laine's actions. “I’ve maybe been a little bit in his head in the last week, saying he hasn’t fought yet and when is it going to happen? I think he took that a little personal. He stood up for his teammate. It fires the guys up. Patty’s a big boy, and he went in there today and showed that. It’s exciting, it gets the boys going, it always does. And he got himself buzzing, too. It’s exciting for us.”

The Jets won't face the Flames again until Feb. 1, when they will play the first of four consecutive games against Calgary – three of which will be on home ice.