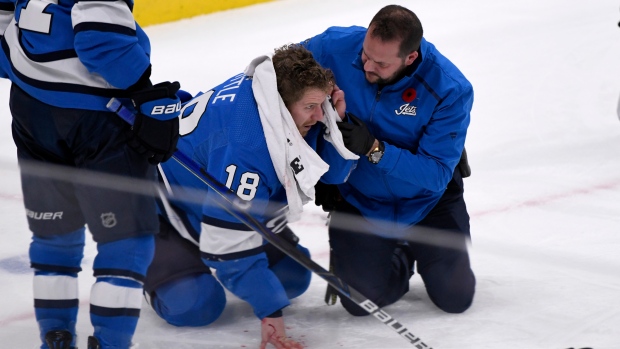 Winnipeg Jets head coach Paul Maurice revealed Thursday that centre Bryan Little has a perforated ear drum and is currently dealing with vertigo after taking a shot to the side of the head Tuesday night.

Little, who was placed on injured reserve Thursday, is expected to make a full recovery but there is no current timetable for his return, Maurice said.

Paul Maurice says Bryan Little is expected to be released from the hospital today. He has a perforated ear drum and is currently dealing with vertigo. He is expected to make a full recovery but no timeline for it. #NHLJets

The team called up forward Joonas Luoto from the Manitoba Moose to fill Little's spot on the 23-man roster.

Little left Tuesday shootout loss to the New Jersey Devils in the third period after taking a shot from Nikolaj Ehlers to the side of his head. The team announced Wednesday that he received 25-30 stitches at a local hospital after leaving the game.

"During the third period of last night's game versus the New Jersey Devils, Winnipeg Jets forward Bryan Little was struck near the ear by a shot," the team said in a statement Wednesday. "Before the completion of the game, Little was transported to St. Boniface Hospital where he received 25-to-30 stitches to close a laceration. Little was subsequently transferred to the Health Sciences Centre's Neurological Unit last night for further observation.

"Little was alert at all times and is in good spirits this morning. Further updates will be provided when available."

The 31-year-old, who missed time earlier this season with a concussion, has two goals and three assists in six games for the Jets this season.