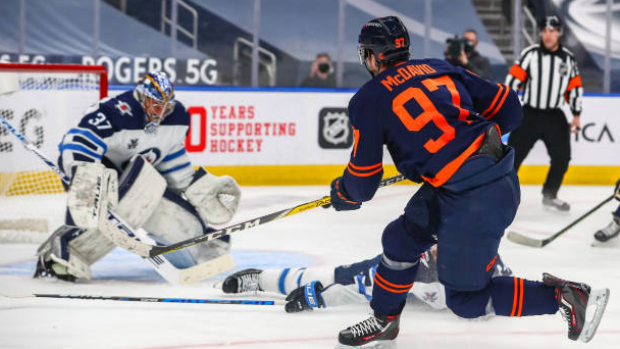 Do the Winnipeg Jets have an answer for Connor McDavid?

Rarely can you boil a playoff series down to a single data point, but the Edmonton Oilers – and Connor McDavid – may be an exception to the rule. Understandably so. McDavid went supernova all season long, and as the McDavid line goes, so go the Oilers.

In recent history, I can’t think of a more difficult assignment than trying to slow down a player as talented as McDavid. His pace and speed is so frenetic that even gifted defenders are put on their heels; add his playmaking ability and the prowess of players like Leon Draisaitl and Ryan Nugent-Hopkins around him, and you have a powder keg of offence.

The Jets have a chance at stealing this series – perhaps it’s a Connor Hellebuyck heater, or their depth picking apart Edmonton’s depth, which has struggled at times this season. But it’s going to be an uphill battle if we see a replication of the regular season. McDavid was comfortable cutting through Jets defenders as the Oilers won seven of the nine games between the teams.

If we look at McDavid’s numbers against the Jets, we can see how one-sided the game was with him on the ice. The counting stats are impressive as one would expect, with McDavid racking up 16 points (seven goals, nine assists) in those nine games. Territorially, Winnipeg’s efforts were futile: 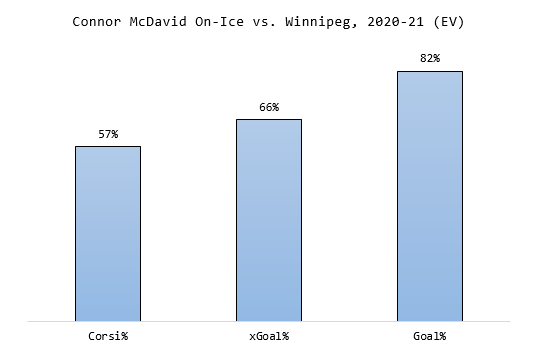 Those are just horrifyingly one-sided numbers if you are Winnipeg, and the Oilers have not been shy about utilizing McDavid – and more generally the team’s top line – as liberally as possible. At 22 minutes and 16 seconds of ice time per game, McDavid was the league’s third-most utilized forward (Mitch Marner 22:26; Draisaitl 22:17). We know from prior playoff experience that McDavid will see another leg up in usage.

I was curious what the Jets had tried over the course of the regular season to try to slow McDavid down. The Jets do have plenty of capable forwards, but the blueline is frequently exposed by more capable offences.

Through this year, this is what the McDavid matchup looked like: 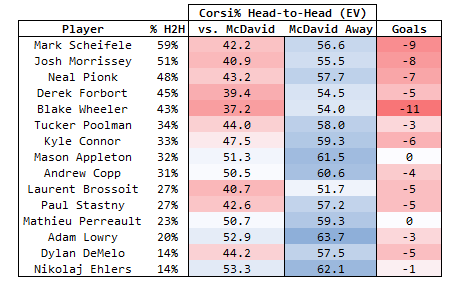 Paul Maurice, like most coaches tend to do, matched best-on-best against Edmonton’s top line. Against a super-charged trio like the McDavid line, you are just hoping to be somewhere around break-even.

That wasn’t the case in the Edmonton and Winnipeg series this regular season, where the Mark Scheifele line and the team’s two most capable defenders – Josh Morrissey and Neal Pionk – were steamrolled.

The scary part about this is McDavid tends to do an inordinate amount of damage on the rush. It’s why you tend to see the Oilers resort to a bit more counter-attacking offensive strategy against superior puck-possession teams – think the Colorado Avalanche or Vegas Golden Knights out West.

In this case, the Oilers are doing damage on the rush and are possessing the puck for lengthy stretches in the Winnipeg defensive third. It is completely untenable to let a McDavid line outshoot your better players on a 60-40 basis and expect anything less than a regulation loss, and it’s largely why the Jets struggled to pick up wins against the Oilers over the course of the season. (The other contributing factor, unquestionably, is how well the Oilers converted on chances during the regular season series – McDavid’s line shot 16 per cent over the series, which is remarkably high even over a nine-game sample.)

It’s difficult to see what optimal strategy is for the Jets here – challenging the McDavid line with this personnel group, talented as it is, seems like shuffling the deck chairs on the Titanic. But it does raise possible questions about what not to do.

If the McDavid line is going to score at will over the course of the series, does it make more sense to move players like Scheifele and Nikolaj Ehlers away from the McDavid matchup in the hopes they can similarly prey on weaker competition?

It’s an exceptionally rare occurrence that either (or both) of those players would ever be sheltered in a series, but the playoffs are about matchups, and the Oilers are not without vulnerability further down the lineup. Knowing that the best-on-best matchup went miserably for Winnipeg during the regular season, it’s quite possible we see Maurice blend the line combinations aggressively to open the series.

It may not work, but then again, very little does against No. 97 these days.