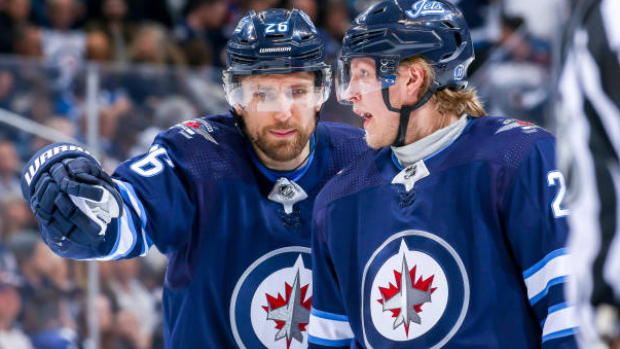 Laine told Pekka Jalonen of Finland's Iltalehti that he believes he would be a first-line player on most NHL teams, but instead has played lower in the Jets lineup. Wheeler, who called Laine's comments a non-issue and said he remains in communication with the winger, pointed to Laine's power-play time and statistical success over the past three years as a counter argument.

"He's certainly one of our best players," Wheeler said. "He spends a good deal of time on that top unit on the power play. We're top five in the league in the past couple years and a big part of that is what Patty does.

"He's a young kid that's certainly had a lot of success in three years. He's definitely not doing it by himself, I can guarantee you that.

"And I think it's a great trait to have to want more, to want more ice time, more playing time. I would say those are all good things, man. You want guys that are hungry for more and not content with where (they're) at."

Wheeler noted Tuesday that he's never gotten the impression Laine wants out of Winnipeg, but will work to ensure comments made by the winger don't affect the team's chemistry.

"You just try to empower everyone to get the best of their abilities, and just realize that everyone on a hockey team, maybe more than any other sport, has a role, has a buy-in," Wheeler said.

Laine told Iltalehti that his linemates have become a topic of discussion in his contract talks. The 21-year-old spent most of last season of a line centred by Bryan Little.

"When you're having contract negotiations, one thing always is who are you playing with," Laine explained, as translated by Jalonen for Winnipeg's TSN Radio 1290. "With the merits I have, somewhere else I'd have an opportunity to play with the best players. Everybody who understands hockey knows that.

"There are top lines and then there is our line. But I play with the guys I'm told to play."

Laine is currently in Switzerland skating with SC Bern and Wheeler said his comments likely came from a place of frustration with his current situation.

"I think he’s just in a spot right now where he’s caught in limbo and probably wants more than anything to just get here and play and be an NHL player again," Wheeler said. "There’s probably a lot of frustration in the fact he’s not where he wants to be."