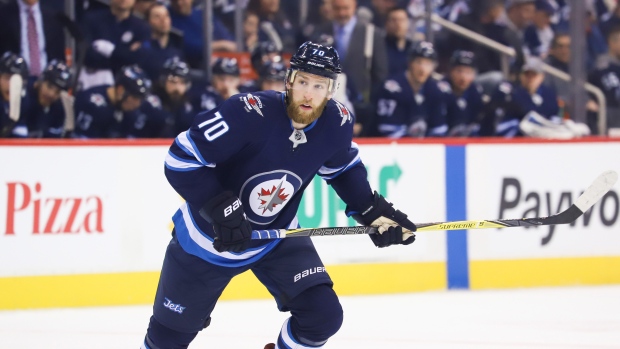 The Winnipeg Jets will not give qualifying offers to defencemen Joe Morrow and Nathan Beaulieu before Tuesday's deadline, allowing both players to become unrestricted free agents on July 1.

Morrow appeared in 41 games for the Jets this season, posting one goal and seven points. He did not dress in any of the team's six playoff contests. The 26-year-old was a first-round pick of the Pittsburgh Penguins in 2011 and was traded to the Jets in 2018 ahead of the trade deadline for a fourth-round pick.

Beaulieu was acquired ahead of trade deadline this year from the Buffalo Sabres for a sixth-round pick. In 48 games between the two teams, he posted three goals and 12 points. The 26-year-old was also selected in the first round of the 2011 NHL Draft, six picks ahead of Morrow to the Montreal Canadiens at No. 17 overall.

Dano spent the majority of this past season with the AHL's Manitoba Moose, scoring 12 goals and adding 18 assists in 50 games. He appeared in eight games with the Colorado Avalanche, failing to post a point.

Cheveldayoff declined to comment on contract negotiations with star restricted free agents Patrik Laine and Kyle Conner, both of whom received qualifying offers.