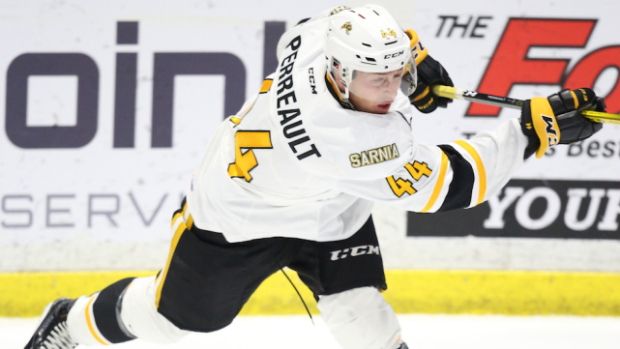 Jacob Perreault has leaned on his dad for guidance throughout his burgeoning hockey career.

Yanic Perreault has a wealth of experience, having played 859 National Hockey League games from 1993 to 2008, including stints with the Toronto Maple Leafs and Montreal Canadiens.

"He's given me a lot of advice," Jacob said. "The best was, 'Just give it your all every time you step on the ice,' and also to keep your head up when you're doing some simple drills so that carries into games and it will be a lot easier to make plays."​

The Sarnia Sting right winger made a lot of plays this season in the Ontario Hockey League, producing 39 goals and 70 points in 57 games. He came in first in a number of testing categories at the Canadian Hockey League top prospects showcase in January, including skating with and without the puck. But his final ranking among North American skaters by Central Scouting remained frozen at 17, which is what it was in the mid-season report.

TSN Hockey Insider Bob McKenzie had Perreault at No. 21 in his final list of all draft prospects describing the 18-year-old as a "fascinating wild card" who could go higher based on pure skill, but could also slide lower due to concerns about his inconsistent effort level.

A number of prospects that appeared in the Top 31 of @TSNBobMcKenzie rankings have ties to former NHLers.

Jacob Perreault, son of Yanic, comes in at No. 21 and as Bob explains, his game couldn't be more different than his dad's: https://t.co/yQ7tkREhbb#TSNHockey pic.twitter.com/JQrXhk53GJ

Needing to solve the consistency issues, Jacob has turned to his first and most trusted hockey coach.

He has been living in Chicago with his family since the pandemic brought the junior hockey season to a halt, and Yanic, who finished his NHL career with the Blackhawks and now works for the club as a development coach, has been watching video with him.

"He pulled out some clips to show me some stuff," Jacob said. "It was a lot of my shifts last year and what I can improve on and also a couple clips from the Blackhawks, like of [Patrick] Kane to see what he does and how he always keeps his feet moving."

With rinks opening up again in the Chicago area, the Perreaults have started applying the lessons from the video work on the ice. So, when NHL teams ask about the consistency issues in his game, Jacob confidently tells them that it won't be a problem moving forward.

"Last year I might've gotten away with a lot," he admits, "but I've always been a pretty solid two-way player and what I need to improve on is totally fixable. Coming into next year, I'm going to be a completely different player. So I'm excited for the season to start again and see where that goes."

The key to fixing things, Jacob says, is his movement on the ice combined with a greater attention to detail in his own zone.

"I have done a lot of video on the defensive side," Jacob explained. "Having quick feet and being more constant with those starts and stops will be the biggest thing. I do a lot of agility work on and off the ice. I do starts and stops, hurdles, ladder and all that."

Jacob spoke to TSN this week via Zoom and took a trip down memory lane reliving his favourite moments growing up around NHL rinks. He also explained why his current NHL role model is Vancouver's Brock Boeser.

It wasn't a great season for Sarnia with the Sting finishing last in the Western Conference. What sort of challenge was it staying locked in when you're not in a playoff race?

"It's really hard. Obviously at the beginning of the year we had a lot of injuries. We had Jamieson Rees out, Ashton Reesor out, Ryan McGregor out, and all our top guys so we started the year off badly. It's hard and you just try and give it your all every day. I think by the end of the year we were doing a lot better job."

What's your favourite memory of being around NHL rinks growing up?

"Oh geez, I have a lot, but I think one of them is the [2007] NHL All-Star Game. I remember going there and seeing all those stars and going into the locker room with my dad. I have pictures with [Sidney] Crosby and all those guys. That's one of my biggest memories. I was maybe around eight or something."

Any interactions with NHLers that stand out in particular over the years?

"My dad got the chance to play with Kane and [Jonathan] Toews which is pretty nice, and you still see them today. Living in Chicago, I go to a lot of Blackhawks games and see Kane, Toews and I got to see [Artemi] Panarin and it was really fun to see how they do it on the ice and as a pro."

Did you ever talk to those guys?

"There were always family skates with the Blackhawks that I would get to go to, but most [conversations] would happen in the summer when my dad used to have a tournament. He'd bring some pro guys in and play four-on-four hockey, a tournament, during one of the weekends in the summer. He'd invite guys like Patrice Bergeron and David Perron and now David Perron lives near me in the summer, so I get the chance to skate with him and ask him for some tips. He's good friends with my dad."

What's the biggest thing Perron has said or done to help you out?

"I just watch him and see what he does. He's always trying to get better if it’s stickhandling or anything. He's doing whatever it takes to become a better player, so I try to pick up on that."

What stories has your dad told you about the top guys on the Blackhawks and their work ethic?

“He's always seeing what the players do and how they're getting better and telling me and he's pushing me to be the best player I can be. Kane was the biggest surprise. On the ice, he's one of the best players in the world and he's been that for years, but my dad told me he's one of the guys who works out the most in the room. I was surprised and that motivates me to work even harder."

You play a different style than your dad, who was a defensive-minded centre. Who do you see in the NHL that are maybe modern-day role models?

Your shot is already pretty lethal. How did you develop that?

"Just practice. We always had a shooting tarp in our basement, and we'd go there pretty much every day and all my siblings and my dad would spend at least 30 minutes of just shooting pucks and stickhandling and over time it shows improvement."

I'm convinced that Jacob Perreault has the best shot in the 2020 NHL Draft class. His one-timer will translate very well to a NHL power play. pic.twitter.com/EujhTRqhyt

I was talking with Saginaw forward Cole Perfetti and he said you have deceptive speed. How did that skill come together?

"My dad always had power skating drills he'd do every week and almost every morning, before school, I’d go and do some power skating with a figure skating coach and that was helpful to see a different side of skating. And then it was just being repetitive and doing that growing up."

You led the field at the CHL top prospects game in January in a lot of testing categories, including skating with and without the puck. With no combine on the schedule, are you hoping that will be a big factor for teams?

"Yeah, for sure. A lot of people were saying my speed was going to hurt me, but I've always known I was a pretty good skater, you know, deceptive. But, also, one thing I want to improve is just keep moving my feet during the games and staying in movement and that will help a lot. We don’t know when the draft is and if my season will start before, but if it does I’ll be able to showcase what I’ve learned over the summer."​

Your dad was one of the top faceoff guys for a long time. Does he ever talk to you about draws?

"Yeah, I'm pretty good at faceoffs too. He's shown me a couple tricks and if there's a draw we need to take then I’m pretty confident in taking it."