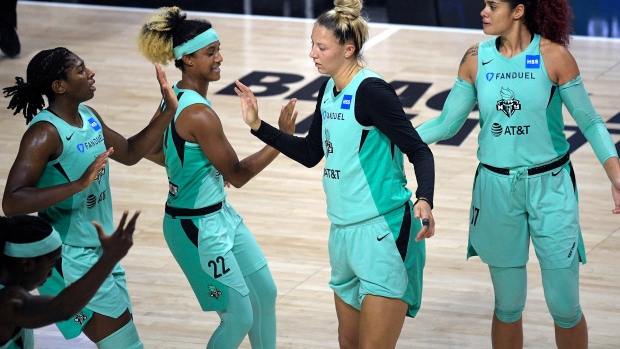 The WNBA tends to avoid playing on Monday with most teams playing games on Saturday or Sunday.

Isabelle Harrison had 23 points to lead Dallas (9-10), which couldn't survive a rare off scoring night from Arike Ogunbowale, who became the third fastest player in WNBA history to reach 1,500 points when she scored her fifth point in the first quarter.

The only players to do it faster were Seimone Augustus and Cynthia Cooper. Later in the period, Ogunbowale reached double-digits in points for the 56th consecutive game. Only five other players have done that in league history.

But Ogunbowale didn't score again until the fourth quarter. She missed all six of her shots in the second and third, finally ending her scoring drought when she tied the game at 83 with over four minutes left. That was her last basket after the opening period, and she finished with 12 points.

New York answered with 3-pointers by Jones, Whitcomb and Laney to build a 92-87 lead with 2:32 left. Dallas cut the deficit to 94-91 with just over a minute left, but Whitcomb hit her sixth 3-pointer of the game to seal it. The Liberty hit a season-high 15 3-pointers.

Whitcomb had 15 of her points in the first half when New York built a 51-47 lead. The Liberty extended the advantage to 10 in the third quarter before Dallas rallied within 74-69 heading into the final period.

The only players with longer double-digit scoring streaks than Ogunbowale in WNBA history were Cooper (92), Augustus (88), Lauren Jackson (84), Sylvia Fowles (83) and Maya Moore (57).

After leaving the Liberty's game on Saturday with a neck injury, Didi Richards returned to play Monday night.

Wings: At Minnesota on Wednesday.

Liberty: At Indiana on Friday.