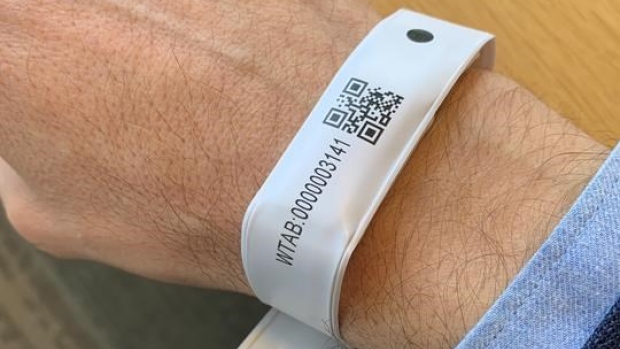 TORONTO — The Toronto Wolfpack are looking at providing fans with disposable tracking bracelets/wristbands during games to allow for contact-tracing in case of COVID-19 once the team returns to play.

The transatlantic rugby league team has struck a deal with TraceSafe Technologies to use its wearable tracking products and services "to help in safely re-opening Lamport Stadium for training, any games played behind closed doors, and games with fans during this time of social distancing."

The Wolfpack say they are the first pro sports team in the world "to embrace the use of wearable tracking products and services for staff and fans."

Still Wolfpack CEO Bob Hunter says the team is still in the "very very early stages" of the concept.

While the pandemic is forcing most sports to resume play with no fans in the stands, the hope is they will be able to progress to having some on hand with physical distancing — and that fans can eventually return en masse once a COVID vaccine is discovered.

Hunter says the hope is that everyone will agree to wear the bracelets during the game, knowing they can toss them away after the final whistle.

"We think for it to work best, it best be compulsory," said Hunter.

The bracelet can also alert users if they are in an area of the stadium they shouldn't be or are not physical distancing.

The wristbands contain a small low-powered Bluetooth chip and would interact with Bluetooth beacons in the stadium. They essentially act as two-way radios that transmit and receive signals from each other — within the venue.

"That gives you the advantage in that nobody has to be tracked by an app that's going to necessarily know where you are after you leave the game," said Blockchain Holdings CEO Wayne Lloyd, whose company owns TraceSafe. "So it's very privacy-focused."

The idea is if someone finds out later they have COVID-19 or have come in contact with someone who has it, they can tell the team — which can then use the technology to see who came in proximity with the affected fan during the game.

"One of the things that health authorities are grappling with is the fact that there's probably not enough contact-tracing personnel," said Lloyd. "And the movements inside a stadium are too complicated to necessarily have manual contact tracing going on ... Stadium owners need to be able to work with the health regulators to re-open safely."

"But they also need to have fans that feel safe being at the game," he added.

Lamport Stadium, which dates back to 1975, is a 9,600-capacity outdoor venue that essentially consists of east and west stands with bench seating.

The data would only be used in case contact-tracing was needed, Lloyd said, and can be automatically deleted after a pre-determined time, for example 14 days after each game day.

Users would have to provide at least a phone number, so they can reached by text if needed.

Hunter says the team would like to have health authorities involved in the process, depending on privacy regulations.

The technology started in maternity wards with the bracelets given to newborns as another layer of security. In the pandemic, the so-called iMSafe bracelets has been used in Hong Kong as a way of further monitoring self-quarantine.

Lloyd said more than 50,000 of the wristbands or bracelets have been deployed in Hong Kong "with more orders coming."

Cost of the bracelet to users is "to be determined," said Hunter, and could be added to the ticket cost.

Season ticket-holders would likely get a discount.

Lloyd said the wristbands can be used to determine if fans are not observing physical distancing, possibly alerting an usher to check out the situation. But the bands can be configured to reflect a family, who are safe together in their bubble.

The deal came together because Wolfpack majority owner David Argyle knows Blockchain chairman James Passin. TraceSafe Technologies is a subsidiary of Blockchain, a technology investment company with offices in Vancouver and incorporated in the British Virgin Islands.

The Financial Times dubbed Passin the "Indiana Jones of frontier stock markets" in 2007 for his travels to such locales as Papua New Guinea, Mongolia and Somalia.

Argyle is also a road warrior. The Toronto-based Australian works in the mining, energy and agriculture sectors often in emerging markets.

The Wolfpack have looked to be on the cutting edge with their partnerships, which includes a line of athlete-focused cannabidiol (CBD) products.

Under terms of their agreement, TraceSafe has an exclusive contract for the 2020 and 2021 season to supply wearable tracing products for Wolfpack home games at Lamport while social distancing restrictions are in place.

The Wolfpack play in England's Super League, which suspended play in mid-March due to the global pandemic. The league, which features 10 English team and one from France as well as Toronto, is looking at resuming play in August.

But Toronto may not host a game at Lamport until October, due to government and travel restrictions.

"We're still praying we're going to get some games here this year but if not then certainly from a planning standpoint we'll be well organized for the 2021 season," said Hunter.

Lloyd, who says his product would be available for use within a month, says his company is talking to other leagues and companies.

"The biggest problem in the COVID crisis has been the business continuity risks around it and people not having systems in place that could deal with the contact-tracing element," he said. "Knowing who was sick and who they've been in touch with."

Like sports, other ventures are looking to continue doing business while adhering to new safety guidelines.