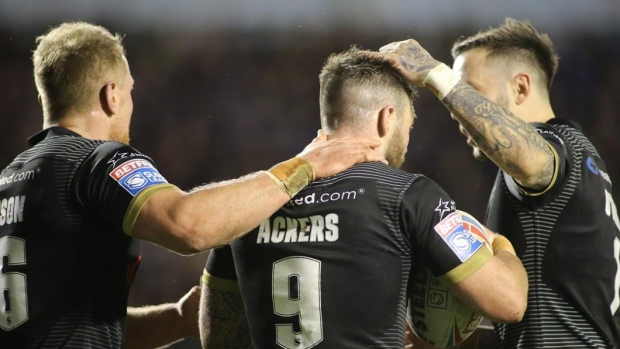 The Toronto Wolfpack will be back in action Aug. 2 in England, but there are more obstacles to overcome before rugby league returns to Canada this season.

The Super League announced Friday the transatlantic team will be one of six clubs in action when the sport resumes after a 140-day hiatus due to the global pandemic.

Toronto faces Hull Kingston Rovers in the first of the three matches at a neutral venue before empty stands. The Wolfpack will kick off the triple-header at 1 p.m. local time. St. Helens will take on the Catalans Dragons at 4:15 p.m., followed by the Huddersfield Giants and Leeds Rhinos at 6:30 p.m.

The league has yet to announce the site. All 12 teams will be in action the next weekend (Aug. 8-9).

The last Super League game before lockdown was March 15 between the Castleford Tigers and St Helens.

The Wolfpack (0-6-0 in their first season in Super League) have not played since March 11, when they blanked Huddersfield 18-0 in the fifth round of the Challenge Cup. All of their games have been in England this year.

"I know they've all been working out but now it's for real," he said.

The revised season will comprise a further 15 rounds of action with the top four advancing to the playoffs. The semifinal winners will contest the Betfred Super League Grand Final towards the end of November.

The championship game was originally slated for Oct. 10.

The hope is that fans will be allowed in the stands sooner than later, given how important gate revenue is to Super League teams.

Travel issues and quarantines are some of the other hurdles that will have to be overcome before Toronto fans see live action.

Under the original schedule, Aug. 2 would have marked the 23rd of Toronto's 29 regular-season games. The Wolfpack's home opener at Lamport Stadium had been slated for April 18.

"Obviously we'd love to have those (home) games, probably at the very end of the season, but I'm not sure right now it's going to happen," Hunter said.

The Wolfpack will not play before empty stands at Lamport, given the travel and housing costs for both teams involved.

"Closed-door stadium games (in Toronto) make no sense for us," he said.

Time is short, however. Hunter said there is only 10 days to two weeks to get the Wolfpack schedule resolved because the league wants to nail down the final schedule.

Under the original schedule, nine of Toronto's first 10 games were to be played in England with the other in France — with the late start due to the Canadian winter and the bubble over Lamport Stadium yet to come down. The Wolfpack were to play 11 of their last 19 games at home, with the season wrapping up Sept. 11.

Three other home games were to be played at neutral sites in England.

With the 2020 season now finishing more than two months later than normal, clubs have agreed to start the 2021 season later than usual. This season kicked off Jan. 30.

One issue still to be resolved is whether the season will feature promotion/relegation. The bottom team in Super League was slated to go down, to be replaced with the winner of the second-tier Championship.

Super League officials want to dispense with promotion/relegation this season because of the disrupted calendar. The issue now goes before the Rugby Football League board, which is slated to meet next month.

This report by The Canadian Press was first published June 26, 2020.